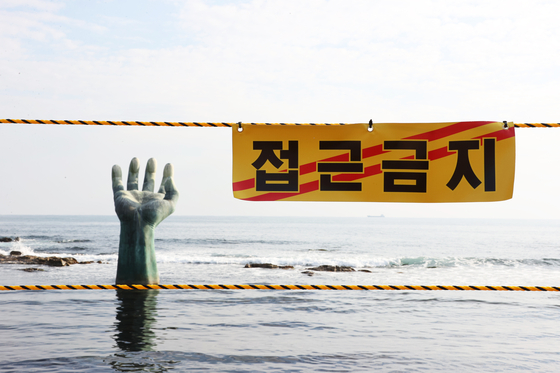 An "access prohibited" sign is hung up to keep visitors away from a popular sunrise spot in Pohang, North Gyeongsang. Many people take photos of the hand-shaped sculpture as the sun rises above it. [YONHAP]


Following the news that popular sunrise-viewing spots will be off-limits for New Year’s, many people are now choosing to welcome in the new year indoors.

Plans range from livestreaming the sunrise from popular spots at home, grabbing a hotel room for a first-hand seaside view of the spectacle and watching the bell-ringing ceremony.

One 29-year-old office worker plans to watch the traditional bell-ringing ceremony at Bosingak pavilion in Jongno District, central Seoul, on New Year’s Eve, set to be streamed online, and then wake up early to watch the livestream video of the sun rising over the East Sea.

“I remember watching the sunrise from home [online on Jan. 1], and the show’s host said they hope they can watch the sunrise in person without a mask the following year,” the worker said, adding they used to welcome in the new year with family by going to these places to watch the sunrise.


Many local governments, including Gangneung and Donghae in Gangwon and Pohang in North Gyeongsang, announced plans to livestream the sunrise online.

Even as events are opting to go only online, some are still making plans to head to the shore for the holiday. But instead of waiting for hours outside in the cold, they plan to watch the sunrise from behind a window.

“Our rooms with floor-to-ceiling windows face the ocean — all our rooms were booked very quickly for New Year’s Eve,” said the owner of a hotel in Pohang, by the East Sea. “We get a lot of inquiries asking whether there have been any cancelations, but I don’t think anyone will cancel.”

Even some accommodations in Seoul that are known for their view of the sunrise, despite not being on the coast, are also fully booked.

“I don't want to be in a crowded place, so I booked a hotel with a good sunrise view,” said 30-year-old Kim, who made a reservation at a hotel on Mount Acha in Gwangjin District, eastern Seoul, in September.

Still others insist on going outside to watch the sunrise, even if from somewhere close to home.

“The sun rises wherever you are, so going to the top of your apartment building or hiking up any mountain in your neighborhood will get you a view of the sunrise,” said Lee Woo-seok, chief director at Play Eat Lab, a company that provides travel information.