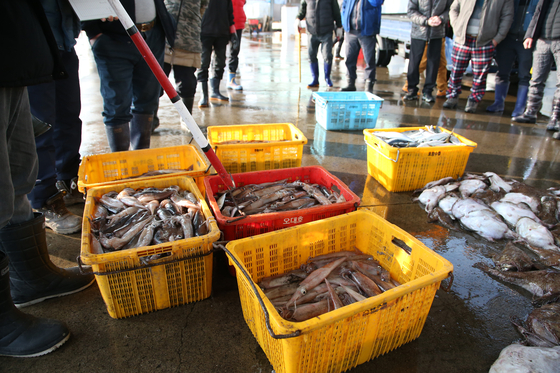 Boxes of squid at a fish market in Pohang, North Gyeongsang [YONHAP]


Seafood prices are on the rise due to poor catches, hurting both restaurants and lovers of sashimi.

According to the Korea Agro-fisheries & Food Trade Corporation, one squid sold for an average 6,124 won ($5.20) on Wednesday, up 18.3 percent on month.

Inflation has been pulling up prices of most food items, but squid prices are rising faster due to short supplies.

Squid catches on the east coast of Korea, which make up 70 percent of Korea’s total catch, are low this year. The Korea Maritime Institute (KMI) says 2,193 tons of squid were caught in November, down 87 percent from 15,021 tons in October.

Squid born in Korean seas swim north to Russian waters in July and August, but return to the eastern coast of Korea in the fall to find warmer water. Since the waters north of Korea have been reporting unusually high temperatures, fewer squid have returned this year.

“Water temperatures north of Korea’s eastern seas during November and December are higher by 3 to 5 degrees Celsius, which has been delaying the squid traveling south,” said Kim Jung-jin, a researcher at the National Institute of Fisheries Science.

Squid that do travel south don't swim straight back to Korean waters because the temperature difference isn't very big. They disperse to nearby seas, which cuts the total amount available to Korean fishermen.

As prices rise, some fresh fish restaurants are taking squid off the menu or hiking prices. A seafood restaurant in Seoul posted a notice on the food delivery application Baedal Minjok reading, “There aren’t many squid caught, please bear with us if the price is expensive.”

Squid isn’t the only seafood with skyrocketing prices.

Halibut, a popular choice for sashimi, was selling for 16,845 won per kilo at Incheon fish markets from January through the end of November, up 25.5 percent on year. Rockfish sold for 16,488 won, up 55.5 percent.

Rising prices are expected to continue next year.

Fish farmers reduced the amount of fish they cultivate because they figured demand would fall due to social distancing rules prohibiting people from eating outside. But demand rebounded. According to a KMI survey of 1,200 adults, 51 percent said they have been using food delivery apps and take-out to eat sashimi since the pandemic.

Experts expect it to take another year for farmed fish supplies to rebound to pre-pandemic levels.