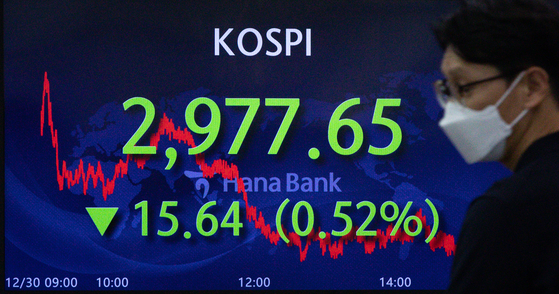 A screen in Hana Bank's trading room in central Seoul shows the Kospi closing at 2,977.65 points on Thursday, down 15.64 points, or 0.52 percent, from the previous trading day. [NEWS1]


The stock market finished the final session of the year with lackluster trading Thursday as investors took to the sidelines amid a lack of market-moving events. The local currency fell against the dollar.

The index opened higher but fluctuated between positive and negative terrain throughout the session before ending up extending its losing run for a second consecutive session.

Institutions and foreigners offloaded a net 751 billion won and 228 billion won worth of local shares, respectively, while retailers picked up shares worth 953 billion won.

"Investors appear to have taken a wait-and-see approach in this year's final session with no concrete events. A low-volume session also often means choppy trading," Han Ji-young, a researcher at Kiwoom Securities, said.

Most blue chips lost ground, though some tech and bio firms gained.

Samsung Electronics shed 0.63 percent to 78,300 won, while chipmaker SK hynix spiked 3.15 percent to 131,000 won after the company said that it has completed the first phase of its acquisition of Intel's NAND and solid-state drive business.

The local currency closed at 1,188.8 won against the dollar, up 2.3 won from the previous session's close.