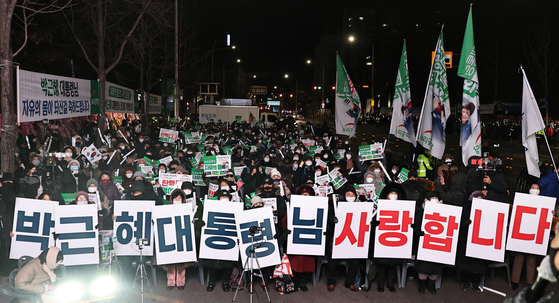 Supporters of former President Park Geun-hye celebrate her release from prison in front of Samsung Medical Center in Gangnam District, southern Seoul, where the former president is receiving medical treatment, as her pardon from President Moon Jae-in went into effect at Thursday midnight. [YONHAP]


Supporters of former President Park Geun-hye gathered Thursday evening and celebrated Park's presidential pardon going into effect at midnight in front of the hospital where she is staying in Gangnam District, southern Seoul.

Park’s well-wishers sent hundreds of celebratory flower wreaths, which were placed outside along a street near the Samsung Medical Center, and installed a 4-meter-high (13-foot-high) tree festooned with LED lights wishing her good health.

Those gathered outside the hospital let off fireworks and cheered as Park's pardon went into effect at midnight.

Park was listed among 3,094 people who were granted special amnesties announced on Dec. 24 by the Justice Ministry. All on the list were released on Friday.

The ministry and President Moon Jae-in’s government said the decision to pardon Park was made in consideration of her deteriorating health and to promote national unity.

Mass protests against the former president and her close confidante Choi Soon-sil over an influence-peddling scandal led to Park's historic impeachment by the National Assembly in December 2016. The Constitutional Court voted to uphold the parliamentary decision in March 2017.

On Jan. 14 this year, the Supreme Court upheld a 20-year prison term for former President Park, the final legal judgment which opened up the possibility for a pardon.

Park, who received shoulder surgery in 2019, has suffered from chronic shoulder and back pain and was hospitalized three times this year. She has spent a total of 1,737 days in jail, the longest imprisonment of any former Korean head of state to date.

Former President Roh Tae-woo spent 768 days in prison, while his authoritarian predecessor Chun Doo Hwan spent 751 days behind bars. Both were pardoned by the Kim Young-sam administration in December 1997.

Although Park and the main opposition People Power Party (PPP) presidential candidate Yoon Suk-yeol welcomed her early release from jail, the government’s decision to also pardon Han Myeong-sook, a former prime minister under President Roh Moo-hyun who was convicted of bribery and completed her two-year prison sentence in 2017, led to some calling the simultaneous pardons part of a political calculation.

PPP campaign spokesman Lee Yang-soo called Han’s pardon an “injust precedent” that signals a president “can make the crimes of those on ‘[his] side’ disappear with a single word, without any consideration of the rule of law or popular opinion.”

Although Yoon has also called for a pardon for former President Lee Myung-bak, who Park succeeded in 2013, Justice Minister Park Beom-kye said in a press conference on Dec. 24 that Lee and Park's circumstances were “different” and that the government “has to take into consideration the public sentiment” in reaching such a decision.

Lee is currently serving a 17-year prison sentence after being convicted of bribery and embezzlement in 2018.