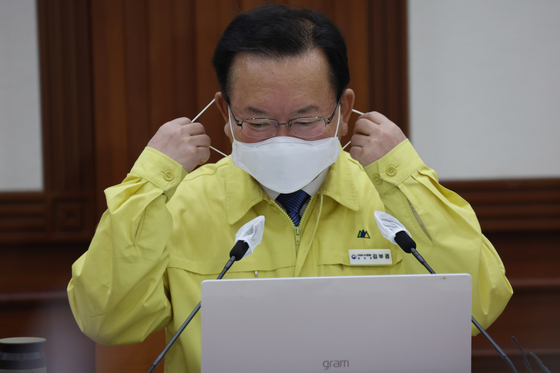 Prime Minister Kim Boo-kyum removes his mask before speaking at a meeting of the Central Disaster Management Headquarters at the Seoul government complex in Jongno District, central Seoul on Friday. [YONHAP]


Social distancing restrictions will be extended to Jan. 16, Prime Minister Kim Boo-kyum said Friday, to try to reduce serious Covid-19 cases and limit the spread of the omicron variant, even as the number of new Covid-19 infections fell below 5,000 for the first time in three days.

“While the number of people who tested positive for the virus is now trending downward and the intensive care unit occupancy rate in the Seoul metropolitan area has dropped to 70 percent, it is still too early to say the crisis has passed,” Kim said at a meeting of the Central Disaster Management Headquarters (CDMC) in Seoul.

He announced a two-week extension of the country’s restrictions on private gatherings and business opening hours, which were toughened on Dec. 18 and originally due to expire Sunday.

“We must work to secure enough hospital beds to handle 10,000 patients a day, and we must also accelerate the administration of booster shots [to the general populace] and vaccines to adolescents,” Kim added.

He pointed out that the country still faces “a lot of critically ill virus patients and deaths.”

Under current rules, private gatherings nationwide are limited to four people, while restaurants and cafes are required to close at 9 p.m.

Businesses where social interactions are limited and therefore considered less risky, such as movie theaters, must close at 10 p.m.

Kim also announced at Friday’s CDMC meeting that the government would compensate some revenue losses suffered by small businesses and the self-employed “in light of the pain they have suffered” in the first quarter of the new year.

The prime minister said the government intends to first distribute emergency relief grants of 5 million won per person to 550,000 applicants, with additional compensation to be made available if the budget is available.

A few months ago, the government gave a round of emergency relief grant measures in response to the cancellation of traditional end-of-year gatherings and bookings.

“We considered many different ways [to compensate businesses], but the overwhelming demand from business owners was that they needed funds as soon as possible to pay off rent and labor costs without the usual end-of-year consumption.”

The prime minister also announced a delay in the implementation of the vaccine pass system for teenagers from February to March 1 to coincide with the beginning of the school year, with a month-long adjustment period.

The introduction of vaccine passes for teenagers has meet with protests from some parents who refuse to vaccinate their children, citing potential side effects and reports of vaccine breakthrough infections.

The number of critically ill Covid-19 patients stood at 1,056 Thursday, with the country adding 4,875 new daily cases, including 4,758 locally transmitted cases, bringing total cases to 630,838, according to the Korea Disease Control and Prevention Agency (KDCA).

There were 108 more fatalities, the highest number this week, bringing the total death toll to 5,563.