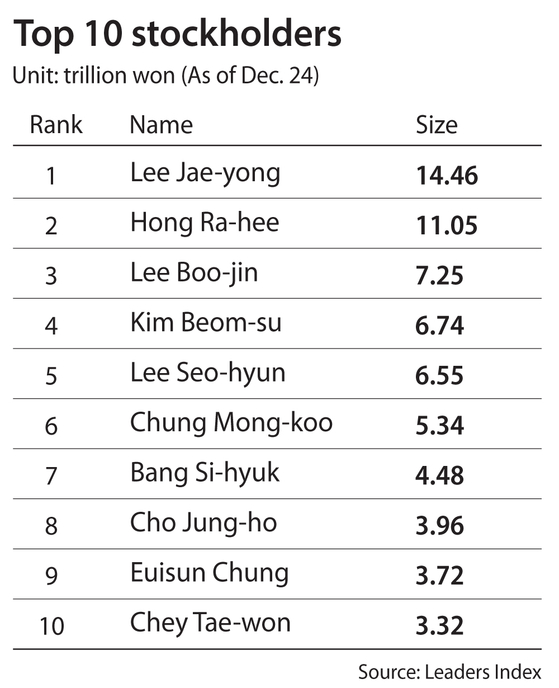 Korean stocks barely budged in 2021, with the Kospi up about 1 percent at the end of December, and small investors, driven largely by a fear of missing out, got hit hard as they bet heavily and lost out.

Results were mixed for bigger investors, with about half of them gaining and half of them losing, though some of the biggest increases were related to the inheritance of shares.

These are some of the findings detailed in a recent report compiled by Leaders Index. Of the 500, the stock portfolios of 252 increased in value, while the holdings of 248 declined.

Lee Jae-yong, Samsung Electronics Vice Chairman and the second largest individual shareholder of the company, held stock worth 14.5 trillion won as of Dec. 24, up 51 percent from the beginning of the year despite the market price of Samsung Electronics falling 5 percent.

The portfolio of Cho Jung-ho, chairman of Meritz Financial Group, was up 313 percent to 3.96 trillion won, the biggest jump among those covered in the report. He ranked 8th in total holdings.

The value of shares owned by LG Group Chairman Koo Kwang-mo fell 23 percent during the period to 2.07 trillion won. Koo's rank moved to 18th from 9th. Lotte Group Chairman Shin Dong-bin's holdings fell 14 percent in the value, leaving him at No. 36.

Kakao founder and Chairman Kim Beom-su held a total of 6.74 billion won worth of stock, a 36 percent increase. The value of shares owned by Bang Si-hyuk of HYBE rose 129 percent to 4.48 trillion won, taking him to 7th place from 14th.

The value of shares owned by Park Kwan-ho, chairman of Wemade, rose 786 percent to 2.59 trillion won. He was 90th at the beginning of the year and 15th by the end.