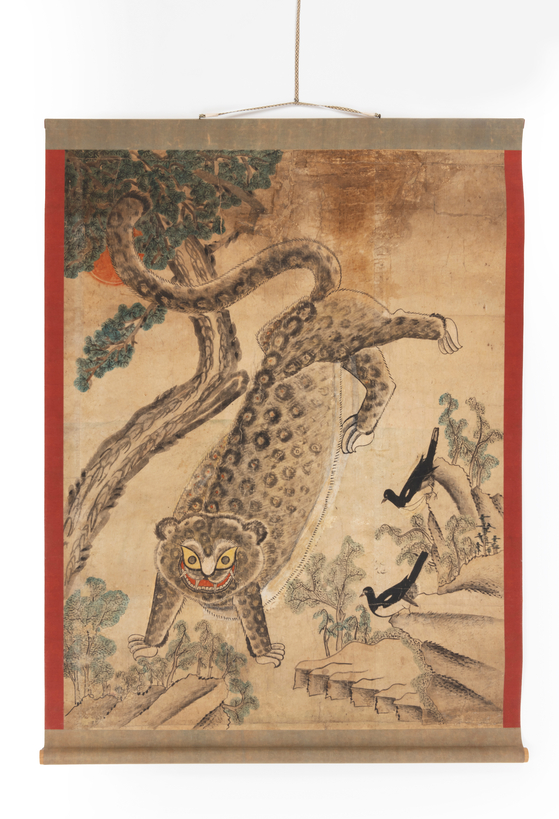 "Tiger and Magpies," a painting from the 19th century [NATIONAL FOLK MUSEUM OF KOREA]


Korea is often referred to as the “Land of Tigers.”

Though they are now near-extinct, the peninsula was once home to a large population of tigers and they freely roamed the mountains that take up more than 60 percent of the country.

Tigers were both feared as a dangerous animal but also respected as a guardian creature. Koreans revere the animal so much so that many believe that the shape of the peninsula resembles a tiger. Even the official mascots for the Summer Olympic Games in 1988 held in Korea were tigers named Hodori, and Soohorang for the 2018 Winter Olympics in Pyeongchang, Gangwon. 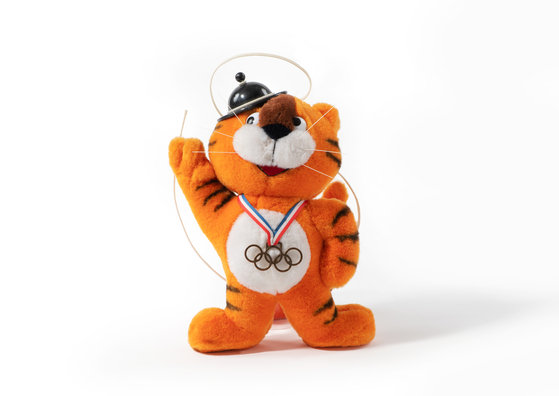 Hodori, the mascot of the 1988 Summer Olympic Games that were held in Korea [NATIONAL FOLK MUSEUM OF KOREA]

This year is the Year of the Tiger, according to the Chinese 12-year zodiac cycle. Each of the 12 zodiac animals has its own significance, but for the land of tigers, this year is particularly significant.

Gigantic tiger installations are popping up around the country. They have been erected in places such as in front of COEX Mall in Samsung-dong, southern Seoul and Haeundae Beach in Busan, and are already proving popular among visitors looking for photo ops. 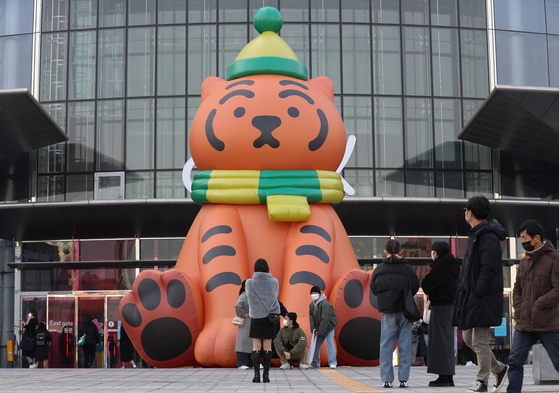 A gigantic tiger installation popped up in front of the COEX mall in southern Seoul on Dec. 23. [NEWS1]


The National Folk Museum of Korea has already opened its annual exhibit that focuses on each zodiac animal. For this year’s tiger, the exhibition “Land of Tigers” kicked off at the museum’s Seoul branch on Dec. 22. 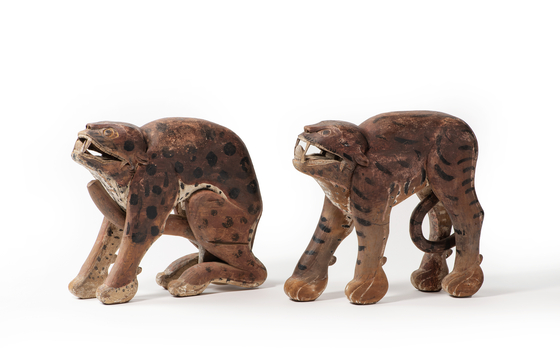 
The animal is also strongly associated with Korean culture. Both mountains and tigers were popular subjects for Joseon (1392-1910) artists. Tigers even appear in the mythology that begins Korean history — the Legend of Dangun.

In this legend, a tiger and a bear have to eat 20 cloves of garlic and a bundle of mugwort and remain out of the sunlight for 100 days in order to become human. The tiger gives up after 20 days, while the bear preservers, finishing the mission and turning into a woman. This woman gives birth to Dangun, who is known as the legendary founder of Korea. Though it is the bear that plays the more significant role in the legend, tigers appear far more often than bears in Korean folklore.

According to the National Folk Museum of Korea, there are more than 1,000 folk tales that portray tigers in "The Comprehensive Collection of Korean Folklore" and more than 700 articles in "Veritable Records of the Joseon Dynasty."

“The vast traces of tigers, left in literature which documents oral tradition and written history, can be seen as the evidence of the tiger walking within our lives for a long time,” said Kim Hyong-joo, the curator of the exhibit.

“Tigers started to disappear along with their habitats, especially because of chakhogabsa, a special force for hunting tigers in Joseon Dynasty. During the Japanese occupation, the policy encouraged the killing of dangerous animals, which aggravated the decrease of the tiger population. Consequently, tigers are now an endangered species. But still, they are with us in our folklore.”

The exhibit sheds light on tigers from two different perspectives, first as “Mountain Gods” and then as the “animal that defeats misfortune.” 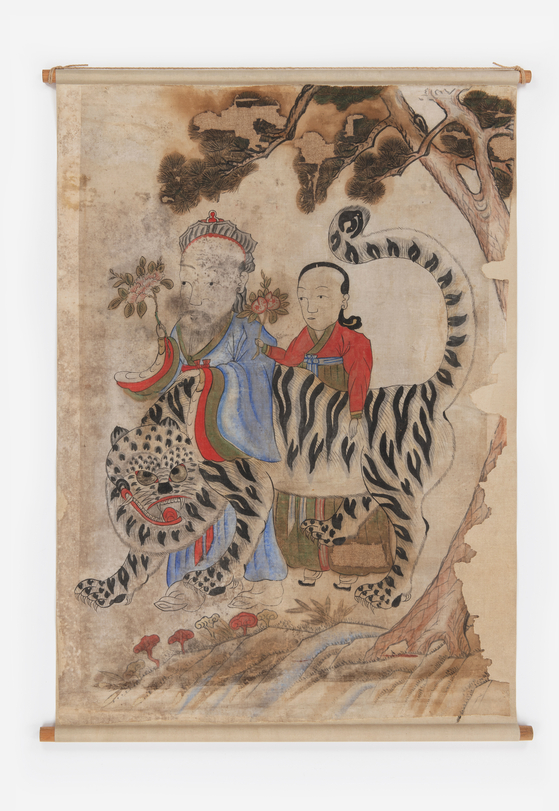 "Sasindo," or a Mountain God Painting from 1890s [NATIONAL FOLK MUSEUM OF KOREA]


In “Sansindo” (Mountain God Painting), which was used during eunsan byeolsinje, a shamanic rite held to honor the guardian deity of Eunsan Village in Buyeo, South Chungcheong, the mountain gods were portrayed together with a white tiger holding a peach and bulocho (the herb of eternal youth). Eunsan byeolsinje was designated as a National Intangible Cultural Heritage in 1966.

There are also monochrome photographs of Sansindo and Sansindang (Mountain God Shrine) taken by folklorist Seoknam Song Seok-han (1904-48) during his fieldwork in 1930s.

For Koreans, tigers were creatures that defeat misfortune. That’s why they frequently appear on paintings for New Year’s Day called sehwa, and on talismans on dano, the fifth day of the fifth month, known as aeho.

“These were the customs of our ancestors who hoped to defeat misfortune with the bravery of tigers,” said Kim. 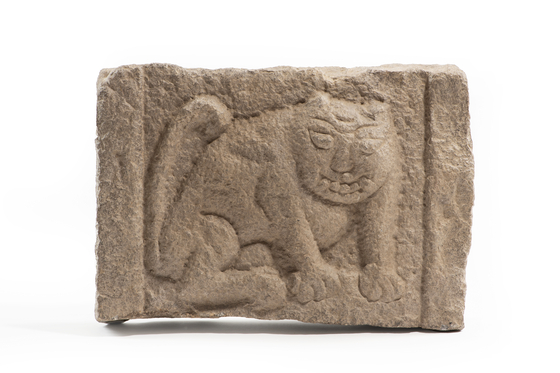 
As part of the exhibition, visitors can witness "Yeolyangsesigi" (Records of Seasonal Festivities around the Capital). It illustrates the use of tigers in the custom of sehwa and aeho. Talisman woodblocks for samjae (three disasters of water, fire and wind) are also on display in this section. Tigers and hawks are usually carved on a samjae talisman. There are also numerous paintings that portray a tiger and magpie together.

“In such paintings, like the 19th century ‘Tiger and Magpies,’ the tiger symbolizes gratitude and the defeat of the evil, while the pine tree symbolizes longevity. The magpies symbolize joy,” said Kim. “Another interpretation of this painting is that the tiger and the magpies are respectively a metaphor of the strong and the weak. It humorously depicts the tiger toppling down to the ground and the magpies perching on a boulder.”

The exhibit runs until March 1.