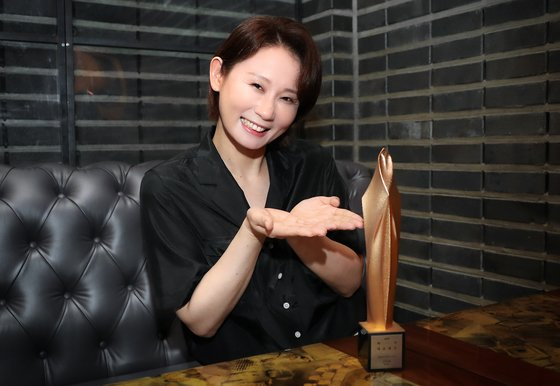 Actor Kim Sun-young shows off the trophy that she received at the Baeksang Arts Award for best supporting actor in the movie "Three Sisters," which was released in January last year. [ILGAN SPORTS]

The 46-year-old took home best supporting actor honors at two of Korea's most prestigious film award ceremonies — the Baeksang Arts Awards and the Blue Dragon Film Awards — for her role in the movie “Three Sisters” (2021).

Kim played the second-eldest sister, Hee-suk, a flower shop owner diagnosed with cancer while stuck in an unhappy marriage.

Kim also appears in Netflix’s new sci-fi series, “The Silent Sea,” which began streaming on Dec. 24. She plays an engineer on a mission to the moon.

Kim is no stranger to the spotlight.  She debuted as a theater actor at the age of 19 in “After the Play is Over” (1995). She later made her TV debut in 2004 with a minor role in the MBC drama series “Hotel King.”


Kim recently sat down with Ilgan Sports, an affiliate of the Korea JoongAng Daily, to discuss her career and love for acting. The following are edited excerpts.


How do you feel about being a two-time winner at the Baeksang Arts Awards?

To be completely honest, I wanted to win, just as everybody does. But when my name was actually called out, I was incredibly surprised. I remember wanting at least one of the cast members from “Three Sisters” to win since it was such a dear movie to me. I am flattered and grateful to have received the award twice in a row.

Was the award extra meaningful to you because it was for “Three sisters”? I know you were very close to the other cast members and of course the director was your husband.


Yes. Fellow cast members Moon So-ri [who plays the eldest sister] and Jang Yoon-ju [who plays the youngest sister] have become like a family to me. It was also a small production with not too many people on set, so we were all very close. It was great to have an opportunity to work with actual family, my husband. He usually doesn’t express his emotions very much but he was really happy when I won the award. He texted me right afterward to send his congratulations. It was the first time in a while that I had seen him so happy.


Winning the award increased the exposure of “Three Sisters.” Also, it showed the power that a low-budget film can have.

It was unfortunate that we didn’t get to meet our audience in person [due to Covid-19]. But thankfully, nearly 100,000 people as well as movie critics came to see the movie, and many seemed to have enjoyed it. Due to our audience, I think the movie will be remembered as one of the good ones. I am very glad and relieved.


I heard that making “Three Sisters” was not easy?


Yes. Preparing for the film alone took three years because of issues with investment and casting. I witnessed director Lee Seung-won dealing with all these hardships for years, and near the end, even I became pretty tired of the whole thing! So when all the cast members gathered for the first table read, I couldn’t believe we were finally starting the movie. I still remember the moment when my husband introduced himself as the director of “Three Sisters.” 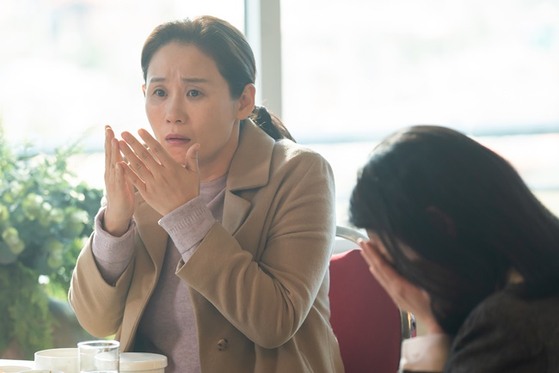 Kim Sun-young during a scene in the movie "Three Sisters," directed by Lee Seung-won. [ILGAN SPORTS]

When you finished filming, how did you feel?


I didn’t feel like it had ended. I was in disbelief. It all hit me after I saw the first edited version of the film. I cried a lot that day. I thought to myself, "So this is how it all turned out." It was then that I finally accepted the fact that we were done with the movie.


I imagine your character Hee-suk’s family in “Three Sisters” and your actual family are the polar opposite.

Hee-suk’s life isn’t unrelatable. It actually is not very far off reality. I’ve had people belatedly confess their painful past experiences after seeing the film. Just because we don’t share, it doesn’t mean we don’t have our own pain. As for me, I have a typical nuclear family.


The three sisters in “Three Sisters” are introduced as hypocritical, timid and troublesome. Which of the three do you most relate to?


I’m afraid I have all three of those qualities. But looking at my more positive characteristic, I am compassionate. It only takes me a few seconds to empathize and relate to someone’s feelings. I guess that is why I am an actor. Above all else, I believe that all humans must be loved. I love people.


Is your career right now all that you imagined when you were young?


No, because when I first started acting, my dream was to become a director. In the past, a lot of places outside of Seoul did not have cinemas and theaters. So, my dream was to make an organization that would do performances in the more rural parts of the country. While trying to do that, I took up acting, but I still haven’t given up my dream of supporting the arts in the countryside.


Have you completely given up on becoming a director?


I do a little bit of directing in the theatrical troupe that me and my husband operate. Right now, that is enough for me. I just love acting, both seeing it and doing it. In all honesty, I want to act until I die. When I get too old to act, I expect I will take up drama coaching. The only thing I can do is acting, so it is hard to imagine myself doing something else. I genuinely hope that I can act for as long as possible.


So you never regretted becoming an actor?

Never. I decided this field when I was in ninth grade and have never looked back. They say that when things get hard, people look the other way, but not me. I have wished to do nothing else other than acting. I have learned and experienced the world through acting.


You are an actor who is said to be able to move people’s hearts. Do you have any tricks that you do during practice?

It’s different every time because it depends on the character I play and what kind of film or drama series it is. But something that I do for all my characters is spend every moment of the day thinking about her. I carry that character with me everywhere I go and try to get to know and understand her in order to act naturally on set.


What is most important in your life right now?


Hmm... No comment! I would like to keep this one a secret. But to say one thing that I am concerned about these days, it is my role as a mother. Sometimes, I feel there is a wall between me and my daughter. Also, there are times that I feel sorry for my daughter. And even though I know in my head that I should make up for the things that I am sorry for, because she is my daughter, I end up not doing anything. I worry about her a lot because she is only in elementary school. I hope she can continue to successfully mature.