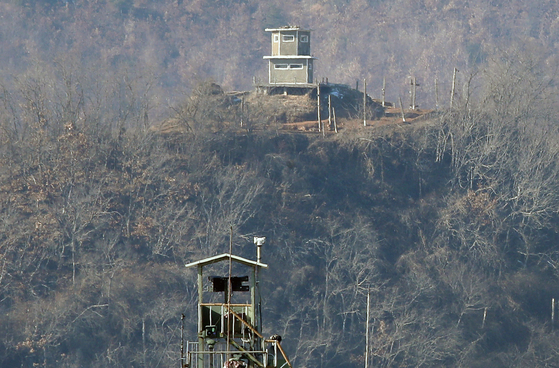 The view of a North Korean guard post from Paju, Gyeonggi, on Sunday. [NEWS1]

Seoul's Joint Chiefs of Staff (JCS) announced Sunday that an unidentified person thought to be a South Korean citizen had crossed the border and entered North Korea on Saturday night.

"At around 9:20 pm last night, an unidentified person was captured with surveillance equipment in the demilitarized zone [DMZ] in the eastern region," a JCS official told the press. "It was confirmed that the person crossed the MDL [Military Demarcation Line] and defected to North Korea around 10:40 pm."

According to the JCS, the unidentified person was first caught on surveillance equipment of the 22nd Infantry Division of the Army at around 6:40 p.m. Saturday while passing an outpost located below the military demarcation line in the eastern Gangwon region. The initial detection was not noticed until nearly three hours later.

“It appears that the guard troops did not notice [the person passing the outpost] at the time,” the JCS official said.

The military notified North Korea of the suspected defection on Sunday morning, but there no official response from the regime has been received, the official added.

The North has taken a tough stance on possible defections amid tighter border control measures introduced during the Covid-19 pandemic.

When a North Korean defector surnamed Kim re-defected to his hometown Kaesong in July 2020, the regime shut down the city, citing prevention of a possible spread of Covid-19. The city was shut down for three weeks.

In September 2020, a South Korean official who worked for the fisheries department disappeared near the border while on a patrol boat and was later shot dead and his body burned in North Korean waters by North Korean soldiers, according to South Korea’s Ministry of National Defense. 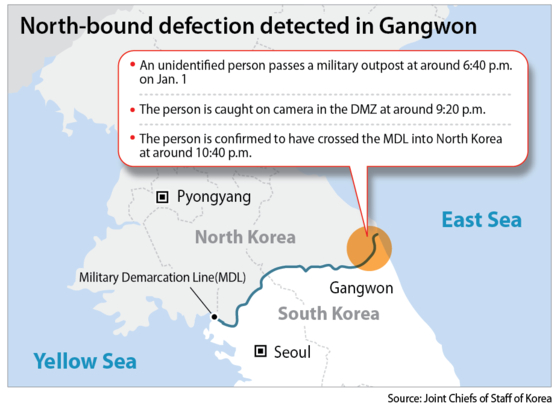 The 22nd Infantry Division of the Army has previously been criticized for its delayed response to defections.

On Feb. 16 last year, a North Korean man wearing a diving suit and a set of fins swam through the military demarcation line. He discarded his equipment and bypassed security fences near the coast of Goseong County in Gangwon — the area that the 22nd Infantry Division is responsible for — using a storm drain, and was caught at least five times on CCTV surveillance cameras, all of which went unnoticed by the soldiers.

It wasn't until hours later that soldiers eventually noticed the man, who was looking to defect to South Korea, at a military checkpoint. Major Gen. Pyo Chang-soo of the division was relieved of his command for the delay in response on that occasion.

Prior to that incident, the division had also failed to respond to a South-bound defection by a North Korean citizen in November 2020, catching the man nearly 15 hours after he crossed barbed wire fences into the South, and before that, a North Korean soldier who defected to the South in October 2012 was not caught by the division until he actually knocked on a guard post and asked to defect.

The South Korean Defense Ministry spent some 21.9 billion won ($18.4 million) from March to December 2020 to install additional surveillance equipment along the western and eastern coast near the DMZ, as well as in the southern coastal regions.