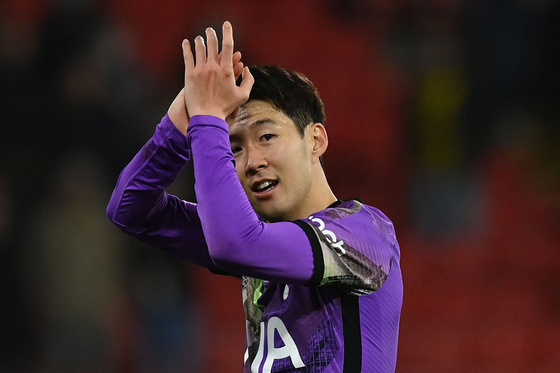 Tottenham Hotspur's Son Heung-min reacts at the final whistle during a Premier League match against Watford at Vicarage Road Stadium in Watford, England, on Saturday. [AFP/YONHAP]


Son Heung-min picked up his third assist of the season in the first game of the new year on Saturday, as Tottenham Hotspur beat Watford 1-0 at Vicarage Road in Watford, England.

Tottenham seized victory at the very last minute, when a well-placed Son free kick found Davinson Sánchez, who headed home the only goal of the game in the sixth minute of second half injury time.

With the win, Tottenham remain undefeated in the Premier League since Oct. 30, or for the entirety of the Antonio Conte era, and sit at No. 6 on the table with 10 wins, three draws and five losses. Son has scored eight goals and picked up three assists so far this season.

Spurs will now step away from the Premier League to play a string of cup games. On Wednesday, the London club will take on local rivals Chelsea in the first leg of the Carabao Cup semifinals at Stanford Bridge in London, with the second leg following at home one week later on Jan. 12. In the middle of the two legs, Tottenham will take on Morecambe in the third round of the FA Cup on Jan. 9.

Spurs will be looking for redemption in the Carabao Cup. Last season, the club reached the final only to lose 1-0 to Manchester City.

Following the cup fixtures, Spurs will be back in action in the Premier League on Jan. 16 with a home match against Arsenal.