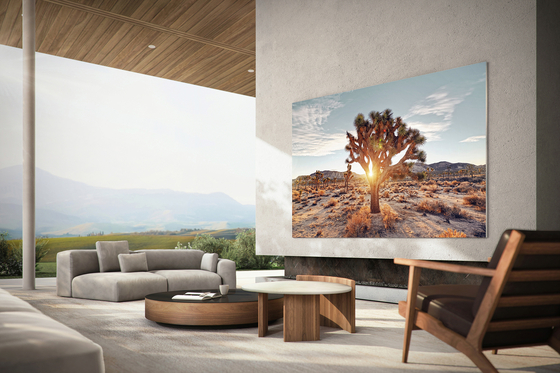 The upgraded Micro LED TVs manufactured by Samsung Electronics was announced on Monday ahead of the CES 2022 trade show, which opens Wednesday. [SAMSUNG ELECTRONICS]


Samsung Electronics is introducing new features and sizes for its Micro LED televisions, the top of its TV lineup, while rival LG Electronics focuses on the automotive sector ahead of the CES 2022 trade show, which opens Wednesday.

Samsung introduced 101-inch and 89-inch models of the high-end TV, as well as upgrades that will allow for higher resolution images with better control over brightness and color.

The television was launched last year for as much as $150,000 as a premium alternative to organic light-emitting diode (OLED) TVs produced by LG.

Micro LED TVs do not need backlighting since the microscopic LEDs can directly emit light, essentially playing the same role as the organic compound in an OLED TV.

They will launch in the first half of this year, but a date and price range has not been set.

The electronics maker also upgraded the brightness level of its Neo QLED TVs, an LCD-based range that's much cheaper, for greater control of the light source.

The upgraded Neo QLED TVs will start sales in March. 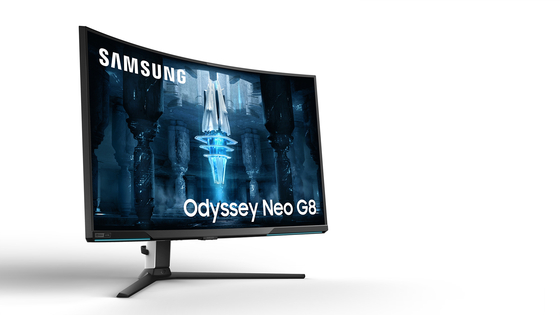 
The company also rolled out a new monitor lineup for gamers.

A curved gaming monitor will be the highest resolution model of its kind, according to the company, with a 4K 240Hz resolution, meaning that it can show 240 frames of high-definition images per second. The monitor is backlit by “quantum mini” LEDs that are one-40th the size of standard LEDs used in the company's other products. They show moving images in greater detail.

The monitors will also launch in the first half of this year.

Rival LG Electronics announced a surprise: a concept model of a self-driving vehicle that can be used for a variety of lifestyle activities such as watching movies or camping outside, reflecting its focus on automotive components and technology. 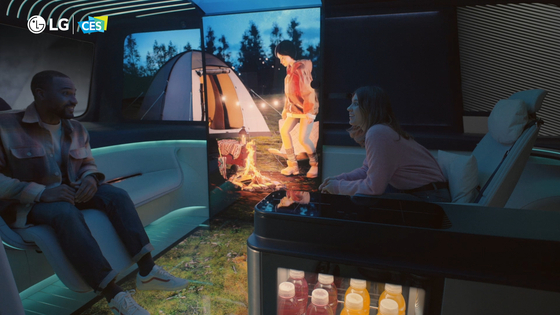 LG Electronics announced a concept model of a self-driving vehicle that can be used for a variety of lifestyle activities dubbed the LG Omnipod. [LG ELECTRONICS]


Dubbed the LG Omnipod, the autonomous driving vehicle will be connected with LG home appliances that use its artificial intelligence (AI) platform ThinQ. The aim is to make a car a lifestyle space, not merely a means of transportation, where people can enjoy a variety of activities.

LG Electronics has been expanding its vehicle component solution (VS) business since group chairman Koo Kwang-mo took office in 2018. The VS sector saw an operating loss of 537.6 billion won ($451 million) in the third quarter of 2021. But analysts have predicted that it will turn a profit in 2022 as orders that were delayed last year due to strained semiconductor supplies will come through this year.

The company also introduced improvements to its organic light-emitting diode (OLED) televisions that will allow them to play images more brightly and vividly. The enhanced OLED evo models use self-lit pixel technology that can be made slimmer than LED TVs.

To make up for a reduced presence at CES in Vegas this year, the company will give presentations on metaverse platforms such as Zepeto and Roblox, so that average customers can take a peek without attending the CES in person. 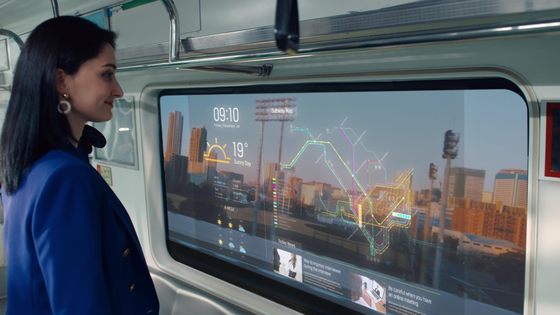 LG Display will show how its transparent OLED screens can be set up in different places such as subways during the CES 2022 tech festival.[LG DISPLAY]


LG Display will show how its transparent OLED screens can be set up in different places such as subways, shops and homes.

The screens, for instance, can be used as windows in subways to show advertisements or information about a neighborhood a train is passing. In offices, OLED screens can act as windows when they're turned off but be used as monitors for presentations during meetings.

At shops with big windows, multiple screens can be connected to make up one gigantic screen.

The company also introduced a new in-plane switching (IPS) technology for LCD screens that can display much deeper blacks than average IPS displays. The "IPS Black" LCD display can bring out more vivid colors on its screens by giving more contrast between bright and dark hues, the company said.

The chip, dubbed Sapeon, is a low-power graphic processor with improved energy efficiency. Sapeon runs on 80 percent less power than an average graphic processor unit (GPU), while its processing speed for deep learning is 1.5 times faster, according to the company.

It will also introduce its latest metaverse platform, ifland, as a digital alternative to traveling for business in an effort to help people reduce their carbon footprints.