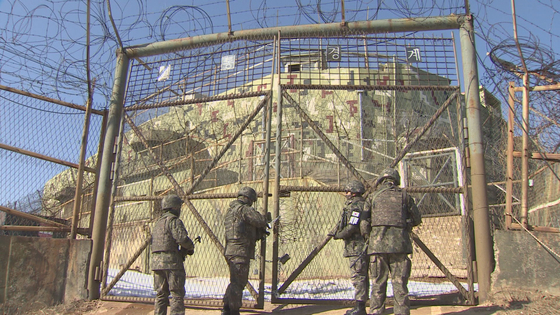 A file photo of a military outpost under the watch of the 22nd Infantry Division of the Army in Goseong County, Gangwon, the area through which an unidentified individual defected to the North on Saturday. [YONHAP]

The unidentified person who escaped to North Korea on Saturday may be a re-defector: a North Korean who defected to the South in November 2020, according to the Ministry of National Defense.

“We suspect it may have been a man in his 30s who crossed into the South in November 2020 through the border in Goseong County, Gangwon,” said a ministry official during a press briefing at the ministry headquarters in central Seoul on Monday.

“We made this estimate based on CCTV footage of the individual crossing the Civilian Control Line.”

Authorities said earlier Monday that they narrowed down the scope of their investigation to defectors who had crossed this particular area of the border to get to the South.

The unidentified person who defected to the North on Saturday passed a military outpost in the South around 6:40 p.m., crossing into the demilitarized zone around 9:20 p.m., and then crossing over the military demarcation line around 10:40 p.m.

In November 2020, a defector climbed 3 meter (9.8 feet) barbed wire at the border near Goseong County, Gangwon. He told South Korean authorities he trained as a gymnast in North Korea. At the time, he weighed around 50 kilograms (110 pounds). He was not caught for nearly 15 hours after he climbed the barbed wire.

Asked if there were suspicions the man could have been a spy, the ministry official said no.

“We have ruled out that possibility,” said the official.

He added that North Korea has been informed twice through official notices of the defection, which it acknowledged, but did not share any information in return, according to the official.

The North has taken a tough stance on defections amid tighter border control measures introduced during the Covid-19 pandemic.

When a North Korean defector surnamed Kim re-defected to his hometown of Kaesong in July 2020, the regime shut down the city for three weeks over Covid-19 fears.

In September 2020, a South Korean official with the fisheries department disappeared near the border while on a patrol boat and was later shot dead and his body burned in North Korean waters by North Korean soldiers, according to South Korea’s Ministry of National Defense.

“The person who crossed the DMZ is more likely to be a re-defector than a spy, and is unlikely to be infected with the coronavirus,” said Leif-Eric Easley, associate professor of international studies at Ewha Womans University in Seoul. “But their life is in peril because of North Korea’s pandemic protocols.”

The area through which the unidentified individual fled to the North on Saturday falls under the watch of the 22nd Infantry Division of the Army, and has seen several defections in recent years.

It’s where a North Korean man wearing a diving suit and a set of flippers swam over the military demarcation line and reached land, bypassing security fences on Feb. 16 last year. He wasn’t caught for hours after he had crossed the border.

It’s also the area where a North Korean soldier who defected to the South in October 2012 was not caught until he knocked on a guard post door and asked to defect.

Several commanders of the division, including Major Gen. Pyo Chang-soo, were relieved of their posts for the division’s delayed responses to the defections.