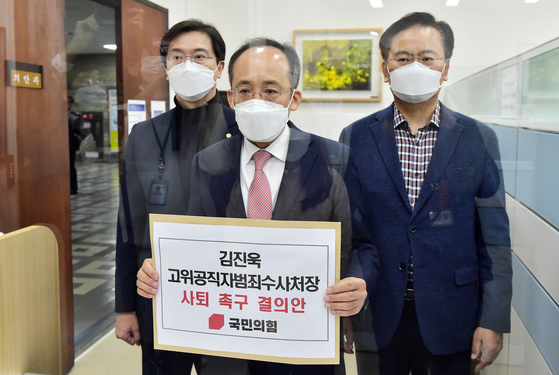 
Lawmakers from the opposition People Power Party (PPP) submitted a parliamentary resolution Monday urging the resignation of the head of the state anti-corruption watchdog in connection with the agency's collection of phone records of journalists and politicians.

PPP floor leader Kim Gi-hyeon held a press conference at the National Assembly to condemn the Corruption Investigation Office for High-Ranking Officials (CIO) and urged that CIO chief Kim Jin-wook resign in light of the agency’s phone log collection activities, which he argued showed that Kim “has forfeited both legal and moral authority and can no longer perform his duties.”

The PPP floor leader added that Kim’s immediate voluntary resignation from his post was the “least” he could do from an ethical standpoint.

According to the PPP, the CIO has collected the phone records of at least 88 PPP lawmakers, a figure which amounts to approximately 85 percent of the party’s 105 lawmakers in the National Assembly.

“The fact that the CIO made off with the phone records of [our] lawmakers, who have no relation to the probes it is currently conducting, is tantamount to a colossal abuse of power in the course of an overly intrusive investigation,” PPP floor leader Kim said.

He also put pressure on the ruling Democratic Party and the administration of President Moon Jae-in to condemn the CIO, an agency that was established to devolve some investigative powers from the state prosecution service.

“The Democratic Party’s presidential candidate Lee Jae-myung should promptly apologize to the people for defending the criminal Kim Jin-wook and make clear his support for an investigation into the charges of illegal activities that have been raised against Kim,” he said.

“President Moon Jae-in must demand an investigation into the accusations against Kim,” he added.

The ruling party and key figures in Moon’s administration previously criticized state prosecutors for meddling in politics by undertaking sensitive investigations of high-profile politicians and government officials, and strongly supported the establishment of the CIO as a neutral body to handle such issues.

Allegations that the office, now entering its second year, collected phone records from not only suspects in its probes, but also journalists who released critical reports about the agency have led to a probe by state prosecutors into the agency.

The Supreme Prosecutors’ Office, the highest agency within the state prosecution service, has already assigned a probe into the CIO to a team of investigators at the Anyang branch of the Suwon District Prosecutors’ Office on Wednesday.

The probe follows a formal criminal complaint from a civic group called the Society for the Preservation of Law and Order, filed on Dec. 23, alleging that CIO chief Kim and other officials abused their power by collecting phone records from journalists, chief among them TV Chosun and JoongAng Ilbo reporters who covered an illegal travel ban issued by the Seoul Central District Prosecutors’ Office and probed by the CIO.