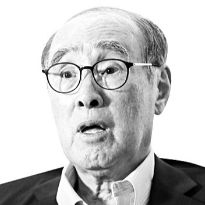 Lee Hong-koo
The author, a former prime minister, is chairman of the Seoul Forum for International Affairs.


In the New Year, our country must somehow confront a political scene overly controlled by presidential power so that its people can proudly declare the truth of Clause 1 of Article 1 in the Constitution, which says, “The Republic of Korea shall be a democratic republic.” This country was ruled by monarchs during the feudal era, while authoritarians governed in the mid-20th Century. In Korea’s modern politics, presidential power monopolizes national governance. This demonstrates that our politics have deviated from the normal course of democratic politics.

Even during the era of founding president Syngman Rhee — when he was forced to resign and live in exile in the face of national resistance to his election fraud and dictatorial rule — the term “presidential supremacy” going beyond the Constitution was not used. According to experts, including lawyer Junn Sung-chull, an anomaly — in which the current administration was able to ignore the global standards of democratic politics and attempted to run the country by bypassing the Constitution over the past few years — was possible thanks to the ruling power’s conviction that its liberal politics should be allowed to control everything because it promoted justice for the weak. The term or concept of presidential supremacy reflects that tendency.

The misunderstanding that justice can be monopolized cannot coexist with democratic politics and a constitutional system. The upcoming presidential election offers a precious chance to end the delusion of a domineering presidency and restore constitutional politics to Korea.

We once had a debate on whether it is really fair to guarantee the stability of presidential power through a five-year, single-term presidency. As two former presidents are either in prison or just released by special pardon after court convictions, it is time to redefine presidential powers.

Instead of ensuring the five-year, single-term presidency stipulated in the Constitution, we need to consider an alternative of introducing the parliamentary system — in which the prime minister from a majority party in the National Assembly forms a Cabinet and oversees state affairs — to avert unnecessary debates on supreme presidency and restore the people’s sovereignty. Most successful democracies are being run on the parliamentary system rather than the presidential system.

As the presidential election is scheduled for March, it may not be a good time to discuss new governance systems. Nevertheless, the ruling and opposition parties need to address the issue after the election and try to revise the Constitution to end the backwardness in our presidential system epitomized by the supreme presidency.

Korea’s political history shows that it is a matter of political determination for the president and the legislature to cooperate and exercise flexibility while keeping the current Constitutional system. After the military regime accepted a Constitutional amendment to introduce the first direct presidential election system in the wake of the tumultuous democracy movement in June 1987, Roh Tae-woo was elected president in December. Two months after his inauguration in February 1988, the 13th parliamentary elections were held and the ruling party was outnumbered by opposition parties for the first time. Three opposition parties were in charge of a special committee investigating corruption in the Fifth Republic and another special committee on national unification.

The supreme presidency, where the Blue House decides everything and makes the people and politicians’ participation meaningless, is a tough challenge to overcome. If political leaders and the people choose to make the country an exemplary democracy together, the next presidential election will provide an opportunity to move toward a bright future.