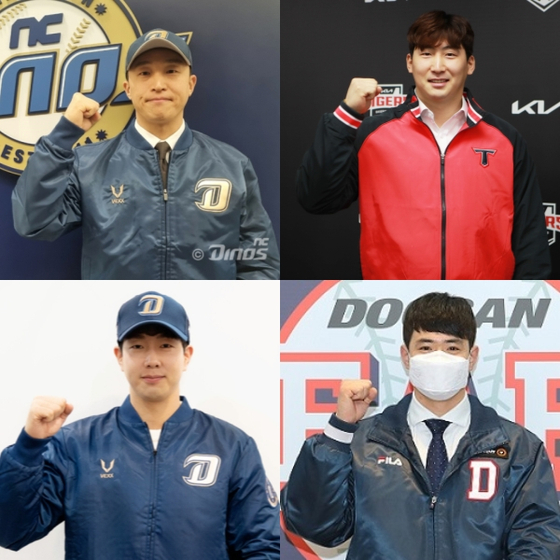 
The new year dawns with just one man left standing in the KBO free agent market, with 13 of the 14 players securing a contract for the 2022 season.

As of press time, Jung Hoon of the Lotte Giants is the only player yet to sign a new deal for next year. Jung was drafted in 2006 by the Hyundai Unicorns, but didn't debut until 2010 with the Giants. Over 12 seasons with the Busan club, the infielder is batting .277 with 899 hits, 411 RBIs and 50 home runs.

Jung was one of two Giants to opt for free agency this year, alongside franchise star Son Ah-seop. Son, who has played for the Giants for 15 years, took a four-year, 6.4-billion-won deal to join the NC Dinos this year.

Son will be joined in Changwon, South Gyeongsang, by Park Kun-woo, the former Doosan Bears outfielder who joined the Dinos on a six-year-deal worth 10 billion won.

The arrival of the two big name players goes someway to making up for the Dinos loss of All-Star outfielder Na Sung-bum, who opted to join the Kia Tigers on a six-year-deal worth 15 billion won, rather than taking another shot at the majors. Yang Hyeon-jong, who spent last season with the Texas Rangers, also returns to the Gwangju club on a four-year-deal worth 10.3 billion won.

Park Kun-woo and Na Sung-bum were among the four free agents categorized in the KBO’s “A” category for the top potential candidates, alongside Park Hae-min and Kim Jae-hwan. Of the four, Kim Jae-hwan was the only one to opt to stay with his original team, the Bears, accepting a four-year deal worth 11.5 billion won. Park Hae-min left the Samsung Lions for the LG Twins on a four-year-deal worth 6 billion won.

The Twins were fairly active in this year's free agent market, also keeping former major leaguer Kim Hyun-soo on a four-plus-two deal worth up to 11.5 billion won and bringing in veteran catcher Hur Do-hwan from the KT Wiz for 400 million won.

But while there's only one deal left on the table in the free agent market, three foreign player spots remain to be filled as of press time Monday. The Bears are yet to acquire a foreign position player, although the club has expressed interest in keeping slugger Jose Fernandez.