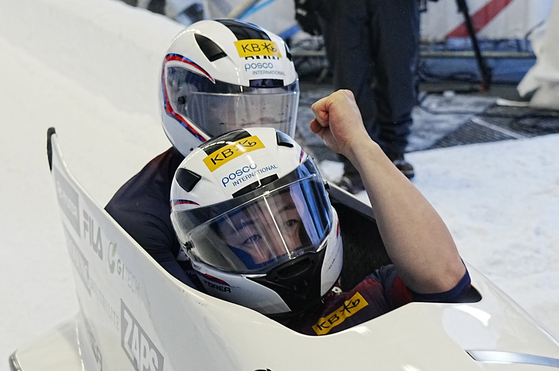 
Korea took sixth place in the two-man bobsleigh race at the BMW International Bobsleigh & Skeleton Federation (IBSF) World Cup, with Won Yun-jong and Kim Jin-su finishing the two runs with a time of 1:39.82, marking their best finish this season on Sunday.

Won started off the World Cup season finishing 17th in the first IBSF World Cup on Nov. 20 last year, alongside Seo Young-woo. But because Seo had to return to Korea after suffering a shoulder injury, Won partnered up with Kim Jin-su from the second World Cup event, where they finished 21st. In the third World Cup, they finished 17th and came in 21st in the fifth World Cup.

With the Beijing Olympics just a month away, the pair’s sixth-place finish might be a sign that they are all tuned up and ready for the big stage.

Kim Yoo-ran finished 10th in the women’s monobob with a time of 1:49.41, 1.29 seconds behind Christine De Bruin of Canada on Saturday. Kim Yoo-ran and Jeon Eun-ji finished 13th in the two-woman bobsleigh on Sunday.

Korean is expected to send a total of nine athletes to compete in the bobsleigh events in Beijing, with two sleds competing in the two-man bobsleigh, two sleds in the four-man bobsleigh and one sled in the women's monobob. An additional three athletes, two men and one woman, are expected to race in the skeleton.