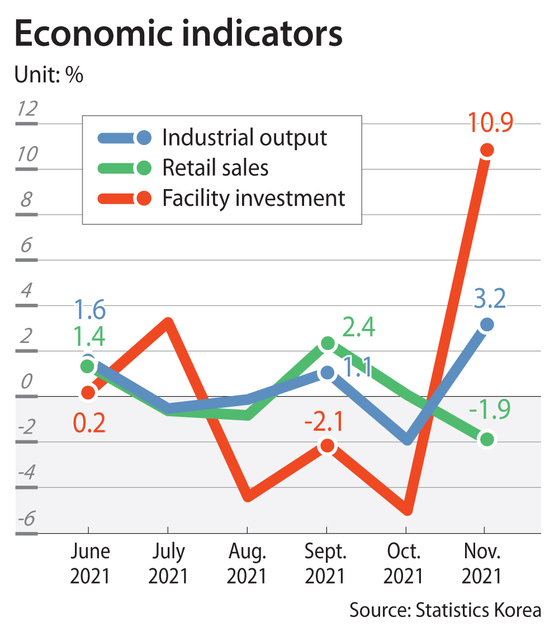 According to Statistics Korea, retail sales fell 1.9 percent on month in November last year, when the government implemented the "Living with Covid" policy and a gradual relaxation of social distancing measures. The on-month drop is the biggest since the 6 percent decrease in July 2020, just before the second wave of the pandemic hit Korea in mid-August 2020.

On year, consumption increased 4.6 percent, slower than the 7.4 percent rise in October.

Although many expected consumption to increase due to eased rules allowing more people to eat outside or travel, spending didn't meet expectations.

"There could be 'revenge spending' if the pandemic went on only for a short time," said Kim Sang-bong, an economics professor at Hansung University, using the buzz phrase for people spending aggressively due to pent-up demand. "When a pandemic keeps going like it is now, people tend to keep spending similar to previous levels even though they earn more, so they can maintain a stable life."

During the start of the fourth wave in July and August last year when daily cases came in between the mid-1,000s and 2,000, retail sales fell 0.5 percent and 0.8 percent on month, respectively.

It then rose 2.4 percent in September when infections broke 2,000 a day.

The overall economy is struggling. The "cyclical component of leading index," an indicator of future economic growth in the short-term, was 101.3 in November last year, down 0.4 percentage points on month. The index being above 100 means the economy is growing, but it fell five months in a row from June.

In November, 533,000 more people were employed on year, up 2.0 percent, but the increase slowed compared to the 2.4 percent rise in October. The number of people employed in wholesale, restaurant and travel businesses were down by 209,000 in November, or by 3.7 percent.

"Businesses of small to mid-sized enterprises will be more volatile in both the "Living with Covid" stage and post-Covid," said Noh Min-sun, a researcher at the Korea Small Business Institute. "The government and financial authorities need to keep an eye on loans outstanding and increasing production costs following inflation and the key rate increase."