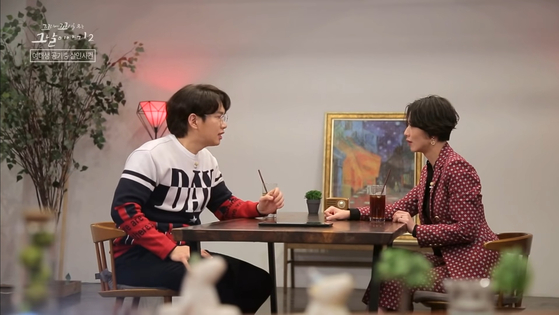 SBS's entertainment show “The Story of the Day that Bites the Tail on the Tail,” better known by its Korean abbreviation “Ggoggomoo,” introduces true crime cases in the form of a storytelling session between panel members. [SCREEN CAPTURE]


Television shows centering around true crime are proving popular on Korean TV and on YouTube. Shows that dive deep into shocking and often gory details of real crime cases, but have a casual format, are attracting a significant majority of their viewers from a specific demographic — women in their 20s and 30s.

TvN's "Crime Trivia," which started airing in April 2021, is set to return for a second season on Sunday. SBS's "The Story of the Day that Bites the Tail on the Tail," better known by its Korean abbreviation "Ggoggomoo," originally started as a pilot program in 2020 but became a regular show last July. "While You Are Tempted" (better known as 'Danghoksa'), also on SBS, first started airing in early 2021 and is scheduled for a third season on Jan. 5.

These shows are centered on the disturbing details of true crime cases, but take the form of a casual storytelling session or discussion between crime experts and celebrity panel members as if they are chatting over coffee. Such format is seen in most of today's crime-related entertainment shows as it has been proving popular, especially among young women. 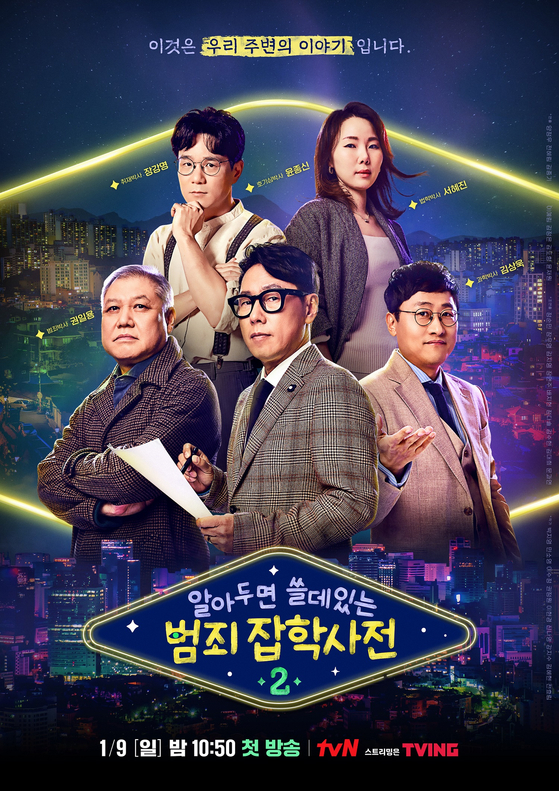 
According to KBS, women accounted for over 68 percent of viewers of its crime show "Pyoleebudong (Two-Faced)" on YouTube — a more accurate source of viewer statistics for younger generations as fewer young people watch or own a TV. About half of the female viewership consisted of women in their 20s and 30s.

Approximately 70 percent of the viewers of "The Story of the Day that Bites the Tail on the Tail" on YouTube are also women, with top age ranges being 20s followed by 30s, said an SBS official. According to him, even shows with a more serious format such as SBS's "Unanswered Questions" (1992-) are also seeing a "rapid increase in female viewers."

"The viewer base of 'Unanswered Questions' has traditionally been men and is still 65 percent male, since it's more of a current events program that deals with many political issues too," said the official. "But the ratio of female subscribers on its YouTube channel has been visibly increasing in recent years since we started dealing with more unsolved murder cases," the SBS official said. 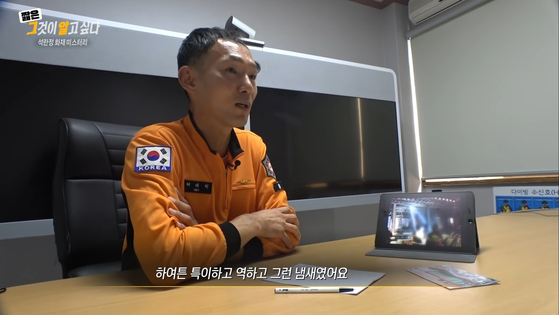 
True crime shows discuss brutal details, often featuring blurred but still chilling photographs from real crime scenes and autopsies. So why is the macabre genre seeing so much success among young women?


In the victim's shoes


"Both men and women are subconsciously drawn to stories about atrocious crime, because we all have a degree of aggressiveness inside us," said Kwak Geum-joo, a psychology professor at Seoul National University.

"But to get really immersed in a show, the viewer has to be able to identify with someone in it. Women, who are weaker in physical strength and face more risk of becoming a target of crime, can easily put themselves in the victims' shoes. Male viewers, on the other hand, don't really have anyone to identify with in crime shows. Since men don't usually worry as much about falling victim to crime, they don't watch such shows to stay vigilant either." 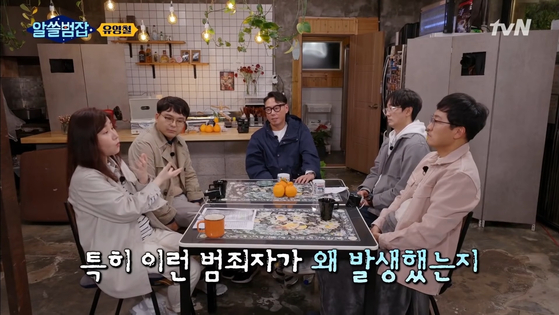 
Twenty-seven-year-old Yoon, an avid female fan of true crime entertainment programs who lives alone in Gwangmyeong, Gyeonggi, told the Korea JoongAng Daily that such shows helped her learn some tips about staying safe.

"I first started watching clips of crime shows on YouTube out of morbid curiosity, but they ended up making me more vigilant in my everyday life," she said. "After watching some episodes about women who were murdered while walking alone at night, I don't walk through backstreets or underpasses when it's dark, even if I have to take a detour. Also, since many cases involve women being followed home, I try to be mindful of my surroundings when I'm opening the door to my apartment. I'm not saying I'd be able to avoid becoming a victim just because I'm cautious. If someone is determined to attack me, I don't think it matters what precautions I take. Still, it doesn't hurt to be vigilant." 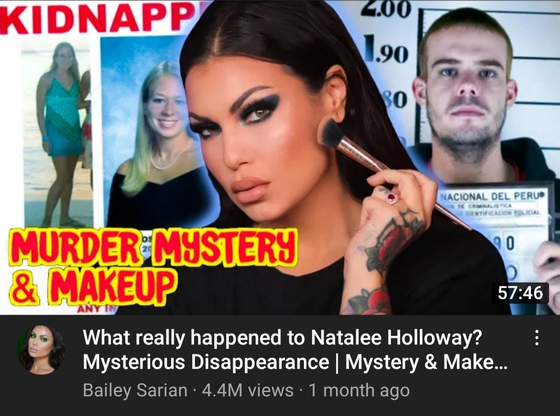 
The popularity of true crime among women is also a phenomenon seen in the West, especially in recent years as popular female YouTubers such as Bailey Sarian (who has almost 6 million subscribers) have popularized discussing real cases in a more light-hearted manner. But Gong Jung-sik, a professor of criminal psychology at Kyonggi University, pointed out that the popularity of the genre among Korean women has another local context underneath it.

"I believe the fact that the majority of true crime show viewers are female is a reflection of the anxiety that Korean women feel about their safety in everyday life," said Gong. "Compared to most other nations, including Western countries, Korea has a higher ratio of female victims of violent crimes. Ironically, it's because Korea has a relatively low number of crimes as a whole, partly thanks to strong gun control. Without guns, most perpetrators can only commit crimes using physical force or weapons that require physical strength, so women are usually the target as they are easier to overpower."

According to statistics from Korea's National Police Agency, 95 percent of violent criminals who committed offenses such as murder, robbery or rape in 2020 were male. Women accounted for 44.8 percent of homicide victims in 2020, while the ratio was 20 percent in the United States that year. For sex crimes in 2020, 97.6 percent of victims were women.

"At the same time, since there are no mass shootings or gang gunfights, that means there are not as many crimes that men die from," Gong continued. "Korea as a whole is very safe thanks to gun control, but it paradoxically leads the ratio of female victims, especially those of homicide, to be higher." 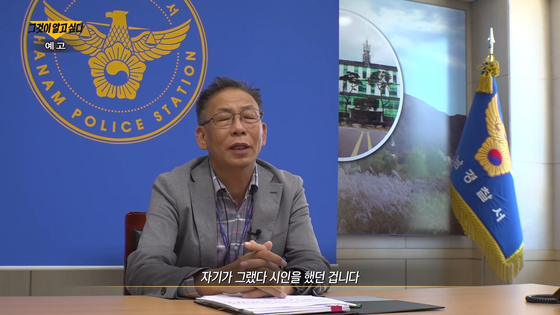 How much is too much?

Although shows about true crime can offer information, Prof. Kwak expressed concerns about the possible side effects of becoming too invested in such shows, which often convey graphic details.

"Desensitization and anxiety regarding crime can coexist," said Prof. Kwak. "Crime shows can make viewers more vigilant, even constantly fearful of crime. At the same time, viewers can become numb and seek more sensational content. It's important to find a healthy amount to watch, for the viewer to stay informed but not to the point of it taking an emotional toll."

Another concern is that crime shows may add fuel to the battle of the sexes, a long-standing conflict especially online. Since the majority of episodes talk about male perpetrators and female victims, perhaps inevitably so considering crime statistics, some claim that such portrayal labels and generalizes men as "potential criminals."

Although most viewers usually agree on how brutal and morally depraved the perpetrator is, episodes that deal with crimes more likely to affect women or shed light on the misogynistic motive of certain criminals are prone to creating arguments between men and women in the comment sections. 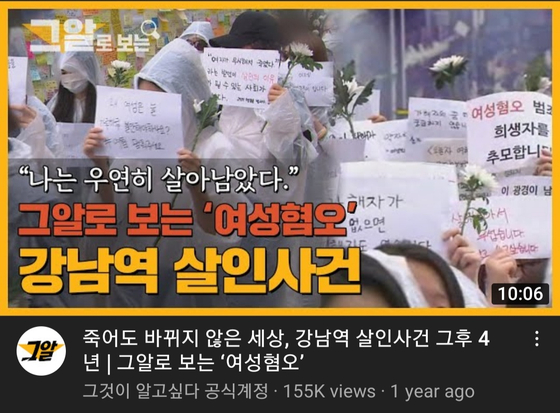 An episode of "Unanswered Questions" on a 2016 murder case of a woman, which sparked a dispute in Korean society regarding whether the male perpetrator's motives stemmed from his misogyny. Many comment threads under the episode continue on with the dispute. [SCREEN CAPTURE]


"We are aware that gender is a very sensitive topic nowadays," said the SBS official. "Victims in the majority of cases happen to be women, but we also have episodes about female criminals. We do our best to shed light on a case in the most neutral way possible without being biased toward any certain gender. But we still do get some arguments in the comment sections."

Heo Yoon, an assistant professor of Korean language and literature at Pukyong National University who also specializes in feminist culture research, pointed out that such disputes do nothing for public safety as a whole.

"These shows fundamentally warn that everyone can fall victim to crime, but it's often inevitable for producers to mention that there is a structural pattern seen in many crime cases," she said. "There's criticism shared among women that crimes which especially target female victims — such as stalking, sex crimes and domestic violence — receive slaps on the wrist as punishment. These are recurring patterns in many episodes, and I don't think pointing that fact out means that the show pushes the idea that men are all potential criminals. People who want to claim that the shows are biased against men will continue to interpret it that way, but it doesn't really contribute to any constructive debate on crime." 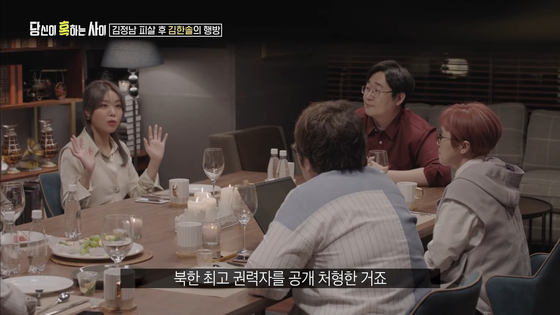 A scene from SBS’s true crime and mystery show “While You Are Tempted,” better known by its Korean abbreviation ″Danghoksa.″ [SCREEN CAPTURE]


"My fellow criminal profilers tell me that women's fear of violent crimes is very understandable, since they can't realistically do much to prevent a criminal from targeting them," said Prof. Gong. "However, for the sake of their mental health, it's not a good outcome for women to think that everyone is out to harm them. Viewers should keep in mind that these shows are a specific collection of crime cases. So instead of being overly immersed, it's best to learn the right amount of information one needs. On the shows' part, they should be cautious not to go for sensational shock value only, but be informative and respectful to the people involved."