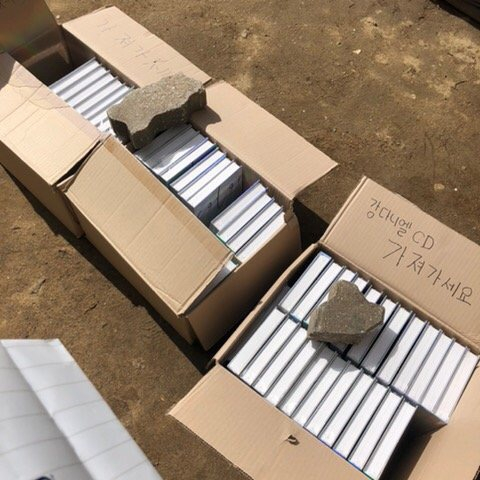 A post on an online community shows boxes of singer Kang Daniel's CDs thrown away on the street. The writing on the box reads, "Take them." [SCREEN CAPTURE]

Total sales for 2021 are estimated to near approximately 60 million copies. But not all of those CDs stay with their buyers, which leaves the K-pop industry with questions about the environmental impact of skyrocketing CD sales.

Considering K-pop CDs sold around 10.8 million copies in 2016 and 24.5 million in 2019, the market has been growing exponentially. According to the Korea Customs Service, K-pop CD exports between January and November 2021 increased by 50 percent compared to 2020, especially rapidly in the Netherlands, which saw an increase of 80 percent and in Germany, which saw an increase of 153 percent. Twelve K-pop acts — BTS, NCT 127, NCT Dream, Seventeen, Stray Kids, Enhypen, Tomorrow X Together, Ateez, Twice, Exo, The Boyz and Baekhyun — each sold over a million copies of their CDs last year.

While the K-pop CD market seems to have a rosy future, such exponential increase also comes with a dark side: Many loyal fans purchase dozens to hundreds of copies of CDs because of various marketing tactics but end up throwing most away. An album usually comes with one entry into a draw for invitations to fan meet and greets, along with randomized photo cards of an idol group's members. In order to increase the chance of attending a meet and greet — which is likened to winning the lottery among fans — and acquire photo cards of their favorite members, some feel internal pressure to buy as many copies as they can.

Although bulk-buying itself does not necessarily take away from how popular an artist is, the problem is when the excess copies end up becoming plastic waste. On online communities and social media platforms such as Twitter, users have been uploading complaints about piles of CDs by K-pop idols left abandoned on the street. 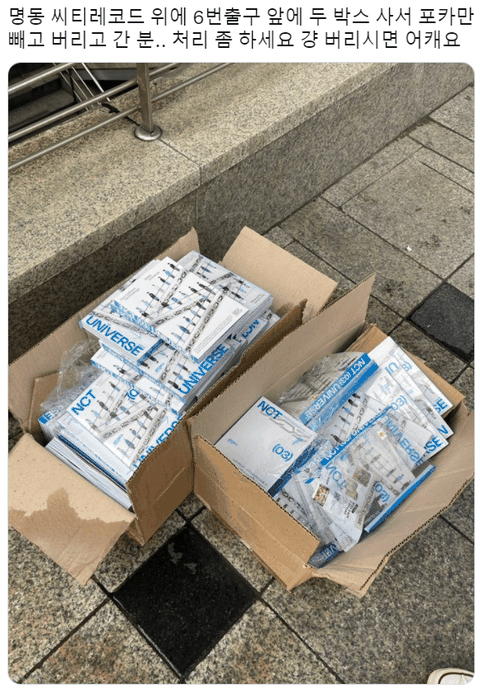 A tweet posted last month complains that someone left two boxes of opened CDs outside a record store. The attached photo shows copies of boy band NCT’s album “Universe” (2021), which has sold over 1.7 million copies since it dropped on Dec. 14, 2021. [SCREEN CAPTURE]


"To the person who bought two boxes [of CDs], only to take out just the photo cards and leave them near Myeongdong CT Record," reads a tweet uploaded last month. "Please take care of it. You can't just throw all this away like this."

The picture attached shows two boxes filled with opened copies of boy band NCT's third full-length album "Universe" (2021), which has sold over 1.7 million copies since it dropped on Dec. 14 last year, presumed to have been left outside a record store in central Seoul shortly after purchase.

"K-pop albums these days are elaborately designed to have collectible value, which makes them a mix of plastic, paper and fabric," said Lee Jai-young, a professor of environmental engineering at the University of Seoul.

"These albums are practically impossible to recycle. It's not a problem how many CDs an individual buys, as long as they keep them, but it is when a mass amount of CDs are discarded and turns into unrecyclable waste. From an environmental point of view, the growing CD market and accompanying excessive purchases are not good phenomena at all." 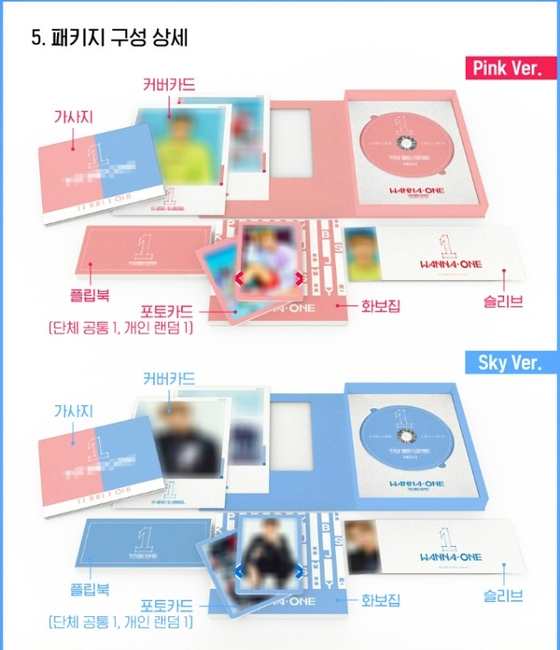 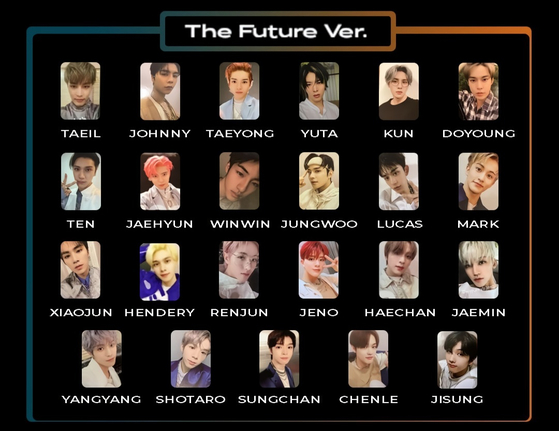 Because K-pop idols' CDs come with randomized photo cards of certain group members, fans gather online after an album's release to create a collective chart of all the possible photo cards. [SCREEN CAPTURE]


"CD sales have been steadily on the decline globally, but K-pop CD sales continue to rise," said pop music critic Jung Min-jae, who also serves as a member of the annual Korean Music Awards' selection committee. "Although the K-pop industry's growth is something to celebrate, CD sales can't be viewed only in a positive light. Even if we take exports into account, the current amount of sales is not proportional to our population or market size. Only a couple of albums sell over a million copies each year in the United States. Without bulk-buying, even the most popular K-pop albums would normally sell around 100,000 copies realistically considering the market size.

"After fan meet-and-greets switched to video calls due to the Covid-19 pandemic, even foreign fans have started bulk-buying in order to win an invitation to virtual fan meets. Since the entries are now mostly made online when fans purchase CDs from certain websites, some fans are even opting not to have the physical copies delivered to their homes. They pay just to get a large number of entries registered but can't keep that many albums. It's still better than receiving them just for photo cards only to throw them away."

The option to not receive physical copies is offered by many artists and record stores in the early weeks after a release, during which fan meet and greets are held frequently in order to boost CD sales. Sales during the first week, dubbed initial sales or the term chodong, which originally comes from the Japanese idol scene, are considered important measures of an artist's popularity and loyalty of their fans. As a result, fandoms often display competitiveness to set a new sales record for their favorite artists. 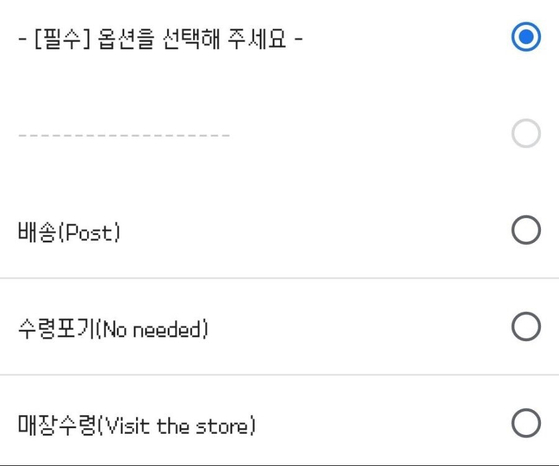 Some fans purchase multiple copies of CDs online just for entries into the fan meet draw, but opt not to receive the physical copies — an option offered by many artists and record stores. [SCREEN CAPTURE]


"We tend to blame fans for bulk-buying, but I don't think fans should be the target of criticism," critic Jung said. "As long as the fundamental system encourages them to buy mass amounts, we can't blame fans for wanting to meet the idol they love so much or trying to get a photo card of a certain favorite member. From the fans' perspective, they have no other choice."

"We started using environmentally friendly paper certified by the Forest Stewardship Council, as well as paper that uses less chlorine in the process of pulp bleaching and produces less carbon," said Head Leader Yi Bo-young of YG's production & marketing group. "We also switched to soy ink and water-based coatings. Apart from the CD-ROM and small packaging components that we are not yet able to replace, upcoming albums will minimize the use of plastic. Our expectation is that the albums will be more biodegradable." 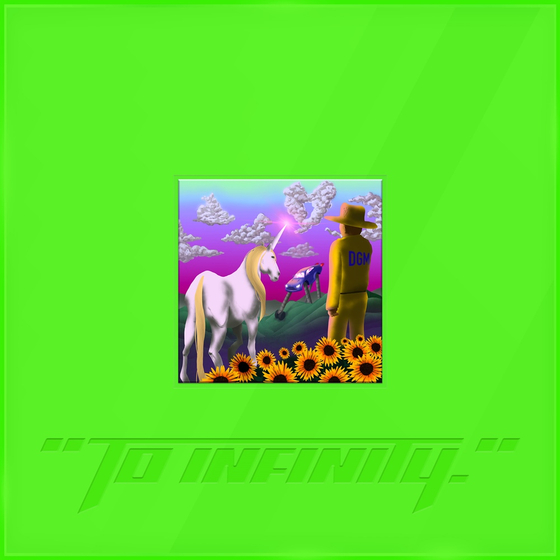 In December 2021, K-pop powerhouse YG Entertainment announced that albums by its artists will have eco-friendly packaging. The first eco-friendly release was Mino of Winner’s solo album “To Infinity” on Dec. 7. [SCREEN CAPTURE]


Yi added that such manufacturing process takes more time, as it requires specific materials and the colors and finishes show up differently from the conventional method.

"Despite trials and errors, we will continue to further research eco-friendly albums," Yi said. "Especially since our artist Blackpink is an advocate for the United Nations' Sustainable Development Goals, we felt the need to be at least a bit of help in protecting the environment."

"Taking little steps into a more environmentally responsible CD market is a meaningful effort," Prof. Lee said, "even if it starts with replacing small components. Hopefully in the future we will further find eco-friendlier materials that can replace conventional ones. But ultimately, reducing the amount of albums being thrown away is just as important as the CD being more biodegradable."

Critic Jung agreed that CDs made with sustainable materials are a good start, but added that the K-pop industry as a whole needs to tackle the fundamental problem and reevaluate its current sales tactics. 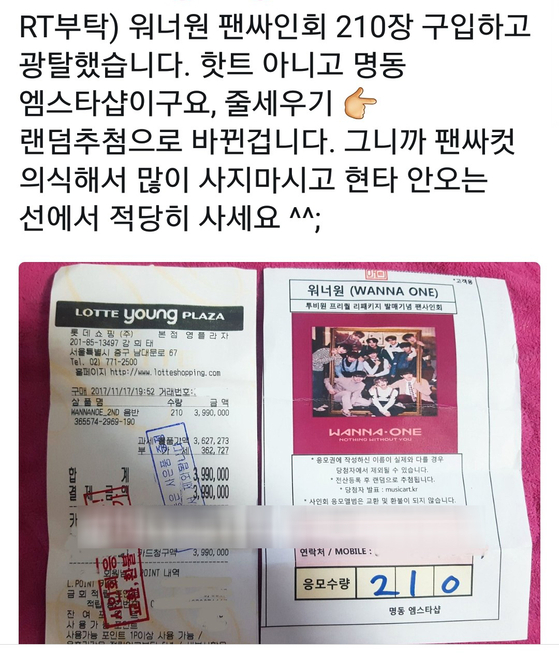 
"Because the current system has been established as the standard for years, it will be difficult for any one agency to announce drastic changes," Jung said. "Agencies must come together for a collective resolution to stop or at least reduce the randomization of CD versions and component items. The industry needs to start separating CDs from fan meets and photo cards. Photo cards should be sold like normal merchandise instead of being so randomized. Selling digital entries for fan meets separately may feel strange at first, but it's better than all those CDs going to waste.

"We will most likely sell even more K-pop CDs next year, and under the current system, it also means more albums are wasted. Of course, the number of copies sold will go down without randomization tactics, but people will still purchase fan meet entries. It's more about agencies, as well as fandoms, letting go of the obsession with numbers like 1 million copies sold or reaching No. 1 on album sales charts. The need to feel responsibility for the environment and change is a greater cause."