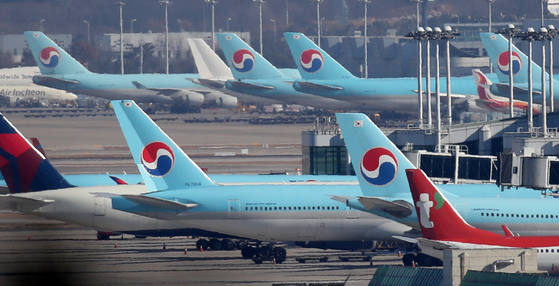 Passenger planes sit on the tarmac at Incheon International Airport in Yeongjong Island on Tuesday. International flights are being cancelled around the world as border regulations tighten due to the rapidly spreading Omicron variant. Some flights that are suspended include those traveling to Shenyang, China. The Chinese government at the end of last year suspended flights traveling between Incheon and Shenyang for two weeks after eight passengers on a Korean Air flight were confirmed to have contracted the Omicron variant. Other airliners are also suspending flights to destination such as Guam. [YONHAP]