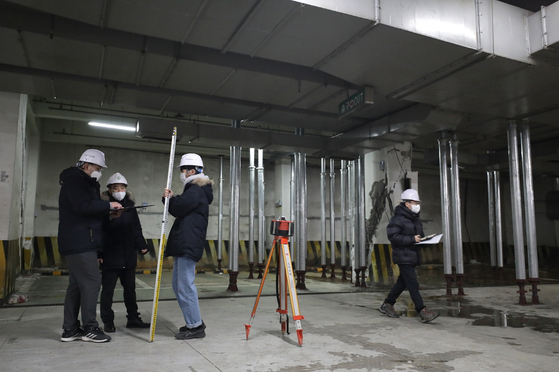 Engineers inspect a building in Madu-dong in Goyang, Gyeonggi, on Monday after one of its basement columns was damaged on Dec. 31. [GOYANG CITY GOVERNMENT]

About 300 people were evacuated from a building in Ilsan New Town’s Madu-dong on Dec. 31 after a column in the basement of the building was damaged and a portion of the road outside the building sank.

Citizens, not satisfied with a one-time building inspection, have since requested a thorough check on the city’s ground in its entirety. They worry that weak ground and structural problems may have caused the accident, not poor construction of the building.

“We will immediately start the inspection of the ground in Ilsan New Town in order to prepare more comprehensive countermeasures,” Goyang Mayor Lee Jae-joon said. “If necessary, we will consult with the central government or Gyeonggi provincial government to come up with a plan and put the citizens' worries to rest.”

Ilsan New Town, comprised of Ilsandong District and Ilsanseo District, started welcoming residents in 1992. The city was built with the idea of providing housing for people moving out of Seoul.

The ground will be inspected using ground-penetrating radars (GPRs) to check the location and size of any underground facility and hollow space.

Some 2.1 billion won ($1.8 million) has been set aside for the inspection already this year, and the city will secure more funds if necessary.

Numerous cases of the ground sinking have been reported over the years.

Since 2016 in Ilsan New Town, there have been eight different cases of the road sinking or cracking close to the areas where subway line No. 3 passes. In December 2019, about five car lanes in the district's Baekseok-dong caved in, forming a pit 50 meters (164 feet) across and 2.5 meters deep.

Some areas in Ilsan New Town have a relatively weaker ground surface, due to its proximity to the Han River and the low ground level, said Professor Jang Suk-hwan of Daejin University’s Department of Civil Engineering.

“Less rainfall last year resulted in a depletion of the water underground, which would have created more hollow spaces beneath the surface,” Jang said. "That led to the sinking of the ground's surface and cracks forming in buildings."

The Goyang city government on Monday started its in-depth safety inspection on the damaged building in Madu-dong and the nearby area. The inspection, estimated to take around one month to complete, is being carried out by the Korea Construction Safety Association. The building will be closed off until the city completes the building inspection and deems it safe to use.