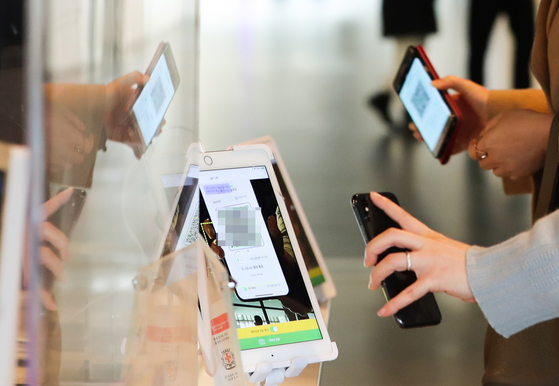 People scan QR codes at the National Museum of Modern and Contemporary Art (MMCA) in Jongno District, central Seoul, on Monday. Starting Monday, vaccine passes are effective for six months, requiring people to get booster shots to enter most businesses, including cafes, gyms and cultural facilities if they got their second shot over six months earlier. [NEWS1]

According to a report in the JoongAng Ilbo, the Korea Disease Control and Prevention Agency (KDCA) is currently discussing with experts fourth vaccine doses for people with compromised immune systems, such as people with leukemia, lymphoma, multiple myeloma, myelofibrosis or organ transplant recipients.

The country's advisory committee on immunization practices is planning to meet this month to make a decision on fourth doses, a government official told the JoongAng Ilbo.

Given that two doses are not enough to form Covid-19 antibody protection for people who are immune-compromised, Korea began administering third shots to an estimated one million people in this group last November. Authorities are planning to administer a fourth shot as early as February since a three-month interval would have passed by then.

Currently, the Korean government is not considering offering fourth shots to the general public. It plans to focus on booster shots for adults over 18 who had their primary vaccination three months ago.

Since Dec. 2 last year, health authorities started calling the extra dose of a vaccine needed after a primary series of vaccination "third shots" instead of "booster shots," suggesting that the average inoculation course had grown and could grow further.

"It is still uncertain how many Covid-19 vaccine doses are needed for complete primary vaccination," commissioner of the KDCA Jeong Eun-kyeong said on Dec. 2.

Like other parts of the world, Korea is urging its people to get booster shots to contain the fast-spreading Omicron variant.

Amid worries over the new strain, Korea reported its first two Omicron deaths on Monday.

According to the KDCA, two Covid-19 patients in their 90s who died while receiving treatment at hospitals in Gwangju in December last year later turned out to have had contracted the Omicron variant. Both were double-jabbed.

"They are the first confirmed Omicron deaths who passed away from a Covid-19 cluster while being hospitalized at a nursing hospital," Park Hyang, director of antivirus measures at the Central Disaster Management Headquarters, told a briefing on Monday.

According to health authorities, one patient received a second shot with the AstraZeneca vaccine in late October. She tested positive on Dec. 26 and died the next day. She was confirmed to have had the Omicron on Dec. 30.

The other patient, categorized as a suspected Omicron case, was also double-vaccinated, but with the Pfizer vaccine in May. She tested positive on Dec. 25 and died on Dec. 29.

Authorities noted the patients’ advanced ages and pre-existing conditions may have led to their deaths.

"They were elderly in their 90s and had underlying diseases," said Park Young-joon, head of the epidemiological investigation team at the Central Disease Control Headquarters.

"Until recently, Omicron infections were found mainly in the [relatively] younger age group of under 60 with many being mild cases," Park said, "but with an increase in patients and transmission into the community, deaths may come in vulnerable groups at a higher risk of severe illness."

Authorities also confirmed that another Omicron patient was in critical condition.

The patient, also fully vaccinated, is in his 70s. He entered Korea after contracting the strain overseas, and is currently receiving high-flow oxygen therapy.