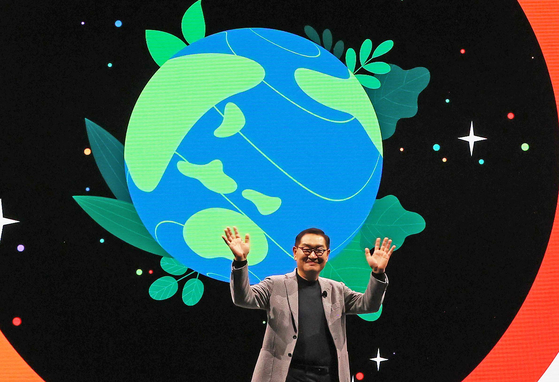 Samsung Electronics' vice chairman Han Jong-hee gives a speech on the company's goals for sustainability and connectivity at the CES 2022 on Wednesday in Las Vegas. [NEWS1]

With Patagonia, the electronics manufacturer will develop a washing machine that can filter out microplastics and stop them from entering the environment, the company’s vice chairman Han Jong-hee announced in a speech ahead of the CES 2022 on Wednesday in Las Vegas.

Microplastics are tiny pieces of plastic that aren't trapped by existing washing machines. They are too small to be seen with the naked eye, but according to World Wildlife Fund, people ingest the equivalent of one credit card of plastic through air or water they take in every week. They can do harm to the human body.

The new washing machine will be designed to filter microscopic residue out, in what was described as “a perfect example of the kind of collaboration we all need to help turn the tide of climate change and restore nature to health” by Vincent Stanley, Director of Philosophy at Patagonia.

Patagonia earmarks 1 percent of revenues to support environmental nonprofit organizations. Many of their outdoor clothes are made of synthetic textiles that generate microplastics when laundered.

“We are so grateful and impressed by the work by Samsung Electronics,” Stanley said in a video message shown during Han’s speech.

The washing machine will have sensors that can calculate the appropriate time and amount of detergent needed for the laundry, to cut water and energy use.

“We are thrilled about this collaboration, but our work won’t stop there,” Han said. “We will continue to explore new partnerships and collaborations, aiming to address the challenges facing our planet.” 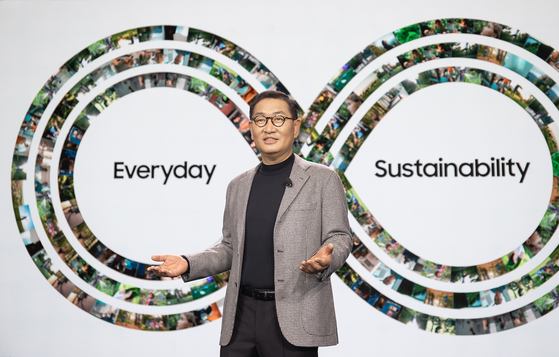 Han Jong-hee, vice president of Samsung Electronics, announces the partnership with five tech companies ? General Electric, Haier, Electrolux, Arcelik and Trane Technologies ? to form a coalition dubbed the Home Connectivity Alliance (HCA) that will allow the six companies’ home products to be connected with each other on Wednesday during the CES 2022 key note speech. [SAMSUNG ELECTRONICS]


Another partnership will come with five tech companies — GE, Haier, Electrolux, Arçelik and Trane Technologies — to form a coalition dubbed the Home Connectivity Alliance (HCA) that will allow appliances to be connected with each other.

For instance, home owners will be able to control Trane’s heating, ventilation and air conditioning (HVAC) systems using Samsung Electronics’ TVs. Information about the air quality from air purifiers can be used to control Haier’s air conditioners, in another example.

The keyword is interoperability, according to Katherine Shin, vice president of customer experience at Trane Technologies.

“HCA members share a belief that connected ecosystems and digital technology will allow us to further develop product experiences that are elegant, hyper-personalized and truly smart for our consumers,” Shin said. “The HCA invites any global manufacturers with a similar vision for efficiency, interoperability and innovation to come and build with us.” 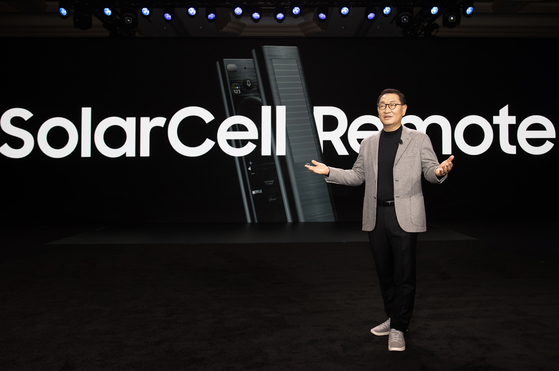 
Han's speech also dealt with other efforts the company is making to protect the environment related to their TVs and monitors.

Samsung's SolarCell TV remote controls, described at last year’s CES as running on solar-charged power, will now be able to be charged from radio frequencies emitted from household gadgets, like Wi-Fi routers. Like last year's models, they will have built-in solar panels and not use disposable batteries.

The remotes will be sold with the latest line of TVs coming out this year.

This will save the use of around 200 million batteries, Samsung says. Samsung Electronics has been aiming to reduce carbon emissions and waste generation. Products such as QLED TVs and Galaxy Buds earbuds are manufactured using recycled parts.

“By 2050, we’re planning on making our TVs and phone chargers operate on near-zero standby power, so that they will consume almost no energy when they’re idle,” Han said.

A new platform that allows both gaming and content streaming will be tied to TVs and monitors sold this year. Dubbed the Samsung Gaming Hub, the online platform will allow consumers to play cloud games — meaning they don’t have to be downloaded — and stream online content. 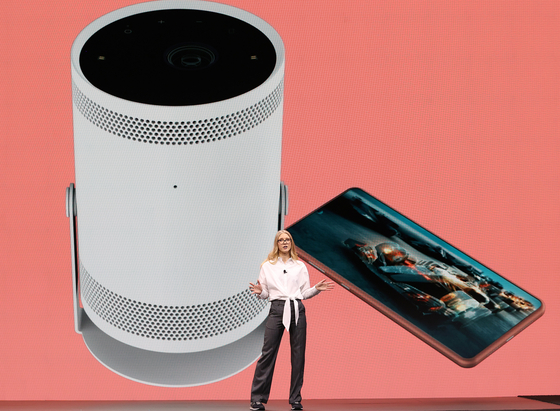 A staffer from Samsung Electronics presents The Freestyle screen projector at the CES 2022 tech festival on Wednesday in Las Vegas. [YONHAP] 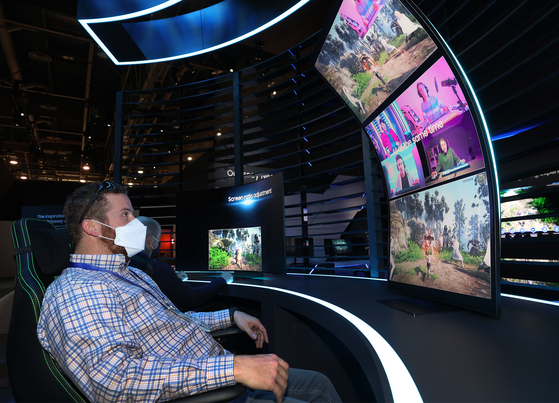 A visitor tries out the Odyssey Ark gaming monitor at the CES 2022 tech festival on Wednesday in Las Vegas. The monitor is set for release within the latter half of this year. [YONHAP]


Two new gadgets were announced in the speech.

The Freestyle is a portable screen projector with a built-in speaker. It can be used to project what’s being played on a phone in an image up to 100 inches wide.

A 55-inch gaming monitor called Odyssey Ark is the latest model in the company’s Odyssey curved gaming monitor lineup. It is rotatable by 90 degrees.

The Freestyle will launch within the first quarter of this year and the Odyssey Ark in the latter half.

Samsung to focus on customization, connectivity at CES