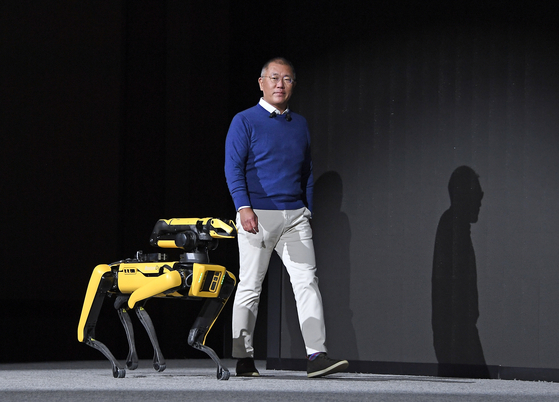 Hyundai Motor Group Chairman Euisun Chung gives a presentation of the company's vision for robotics and the metaverse on Tuesday in Las Vegas ahead of CES 2022 with Spot the robot. [HYUNDAI MOTOR]


LAS VEGAS — Hyundai Motor pitched a range of self-driving devices and robots and promised a future in which digital experiences are overlaid on the physical world, its version of the metaverse.

Korea’s largest carmaker described its vision in a presentation in Las Vegas ahead of the CES 2022 that starts Wednesday both in-person and online.

“At Hyundai, we are harnessing the power of robotics to achieve great things," Chung said, accompanied on stage by a four-legged robot named Spot. "We envision future mobility solutions made possible by advanced robotics — even expanding our mobility solutions to Metamobility,” said Chung.

“This vision will enable unlimited freedom of movement and progress for humanity.”

In the Metamobility era, robots and connected cars will be a medium that links humans with the virtual world, a digital twin of the physical world. 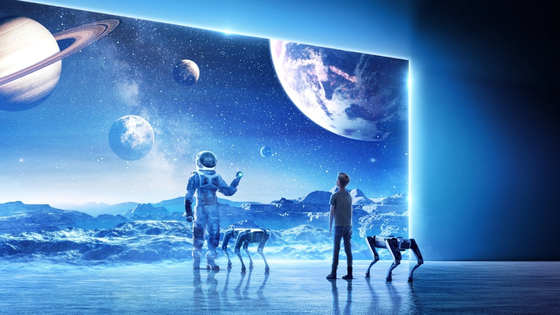 
The core of the presentation was an automotive system called Plug & Drive. Electric modules will be used to make objects like shipping containers or even household tables move on their own with little or no human input.

The modules will have wheels, motors, steering and braking systems, and sensors to detect locations. The system is designed to allow 360-degree rotations without the twisting of internal wires.

One example for moving human beings is the Personal Mobility concept. It is a one-seater vehicle that runs on four Plug & Drive modules fitted with 5.5-inch wheels. It's operated with a joystick, rather than a steering wheel.

A video during the presentation showed an elderly woman using such a system in her house to get around.

Service Mobility is a concept for a range of industries from logistics to hotels. It is a storage space that can move autonomously on four wheels.

For outdoor transportation, the company introduced a module called MobED. The platform base will weigh 50 kilograms (110 pounds), have a two kilowatt-hour battery and four wheels with independent suspension and steering. It can reach speeds of 30 kilometers (18.6 miles) per hour and run for four hours on a charge.

All the modular products are at early stages of development, according to a spokesperson for Hyundai Motor, and far from mass production.

“MobED is a prototype and the Plug & Drive system is more of a concept,” the spokesperson said. “It will take a while to fully commercialize them.”

Chung was asked by reporters after the presentation when his company's vision will become a reality.

"I don't know, but it depends on the metaverse," he told them.  "The technology is developing really fast. So, in the near future, we can connect into the metaverse together with robotics."

Chung said the first robots to work at the intersection of the real and physical worlds will probably be in manufacturing facilities.

"Factory workers will be able to work from home," he said, "With augmented reality glasses, they could check the manufacturing process and conditions of the equipment."

“Robots will become an extension of our own physical senses, allowing us to reshape and enrich our daily lives with Metamobility,” said Song Chang, president and head of the Transportation-as-a-Service (TaaS) Division of Hyundai Motor Group. 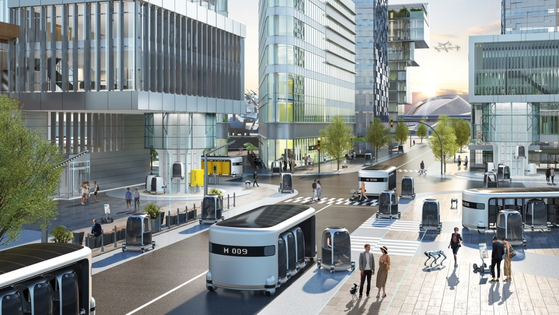 A rendering of an electric personal minibus [HYUNDAI MOTOR]


The video played during the presentation showed an imagined future in which a father and daughter hop in a Hyundai autonomous minibus covered with displays instead of windows. The vehicle takes them to a digital twin of Mars where Spot, the dog-inspired robot developed by Boston Dynamics, was awaiting them.

The emphasis on robotics reflects the company’s strategic shift to automated vehicles like flying taxis and drones.

Chung has said revenue from "urban air mobility solutions" including flying taxis and drones and robotics will grow.

Hyundai Motor's acquisition of the Waltham, Massachusetts-based Boston Dynamics last year is a big part of that ambition.