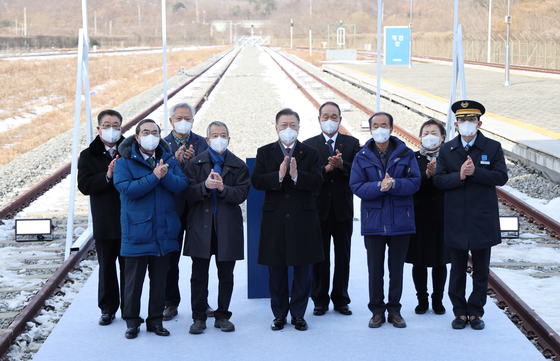 President Moon Jae-in, center, attends a groundbreaking ceremony for a railway project symbolic for inter-Korean relations at Jejin Station in Goseong County, Gangwon, on Wednesday. The South’s border town of Jejin will be connected to Gangneung in Gangwon, enabling the Donghae Line railway to eventually connect to North Korea. [YONHAP]

Moon visited Jejin Station in Goseong County, Gangwon, to attend a ceremony to kick off construction for the Donghae Line railway project linking the eastern coast border town of Jejin to Gangneung in Gangwon.

Through linking the 110.9 kilometer (68.9 mile) stretch between Gangneung and Jejin, the Donghae railway running across the eastern coast of the Korean Peninsula will no longer have any missing section, opening a grand vision to eventually connect to Eurasia.

The groundbreaking ceremony came after North Korea fired an apparent ballistic missile into the East Sea, the first such launch of the New Year.

"This morning, North Korea test-fired an unidentified short-range projectile," said Moon at the ceremony. "There are concerns that this could create tension and deepen the stalemate in inter-Korean relations."

Urging to overcome the situation, he continued, "When the two Koreas work together and trust is built, peace will come to our side one day."

Connecting the roads and railways of the Koreas was recognized as a priority cooperation project during the summits between Moon and North Korean leader Kim Jong-un in Panmunjom in April 2018 and in Pyongyang in September that year.

The cross-border railway projects involve the Gyeongui Line in the west coast and the Donghae Line in the east.

However, these projects had been put on hold because of an impasse in denuclearization talks between the North and the United States in 2019.

The South Korean government in April 2020 designated the Donghae Northern Line construction as an inter-Korean cooperation project, speeding along the process.

The government envisions linking the line across the border through North Korea, to the Trans-Siberian Railway and eventually to the rest of Europe.

Domestically, it is linked to major port cities such as Busan, Ulsan and Pohang.

Seoul has hoped such inter-Korean projects could be a stepping stone toward establishing a peace process on the Korean Peninsula.

However, the North's latest missile launch put a damper on a ceremony that, under a better relationship, would have included Pyongyang officials.

Even with the completion of the line, modernization of North Korea's aged railways would be another hurdle.

Moon said during the ceremony, "We will strengthen our will for economic cooperation through first constructing the southern section of an inter-Korean railway network."