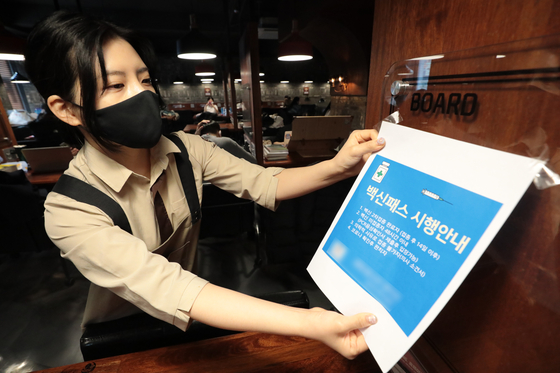 An employee takes down a notice about the vaccine pass mandate at a study cafe in Seoul on Wednesday, after the Seoul Administrative Court ruled against the measure that required adults to show proof of vaccination before entering private educational facilities. [NEWS1]


Confusion surrounding Korea’s vaccine pass system surged after a local court put a temporary hold on the system’s adoption at private educational facilities, citing an infringement on the rights of the unvaccinated.

But as it can take months to reach a conclusion if the issue is appealed, it has become unclear whether the expansion of the vaccine pass to include teenagers can be implemented as scheduled in March.

On Tuesday, the Seoul administrative court ruled that private educational facilities, such as hagwon (cram schools), reading rooms and study cafes, should be temporarily excluded from the list of establishments requiring a vaccine pass for entry — effective immediately.

Korea implemented its Covid-19 vaccine pass system from Nov. 1 last year, requiring full vaccination or a negative PCR test conducted within the previous 48 hours to enter places such as noraebang (singing rooms), clubs and indoor sports facilities. From Dec. 6, more establishments were added, including restaurants, cafes and movie theaters along with hagwon, reading rooms and study cafes — frequently visited by students in Korea.

Minors were exempted, but health authorities said a youth vaccine pass will be enforced starting in March for those aged 12 to 18.

Some angry parents and civic groups filed a lawsuit and requested a suspension of execution, arguing that such a policy is in essence mandating the vaccination of adolescents and infringes on students’ freedom and learning rights.

The court ruled in favor of the applicants.

“The measure [of the Ministry of Health and Welfare] restricts the rights of unvaccinated groups to access and use places such as hagwon and reading rooms,” the court said.

“Considering that there are a considerable number of breakthrough infections among vaccinated people, it cannot be said that there is such a significant risk of unvaccinated people spreading Covid-19 that they have to be restricted from using facilities,” it added.

While vaccination can be actively advised to prevent virus infection, the court stressed that unvaccinated people's right to self-determination should not be neglected.

The Ministry of Health and Welfare issued a statement about two hours after the court's decision, announcing that it will would file an appeal “immediately,” given that unvaccinated people account for more than half of the country's severe cases and fatalities and thus it is necessary to expand the use of vaccine passes.

The Ministry of Justice said Wednesday that it has commanded an immediate appeal in consideration of the importance of the national health system during the pandemic.

“The government believes vaccine passes are scientifically needed during a crisis of infectious diseases and that they should be expanded in the event of a [further] crisis,” Son Young-rae, senior epidemiological strategist at the Central Disaster Management Headquarters, said in a briefing Wednesday.

Regarding claims that the system violates the basic rights of unvaccinated people, Son cited the acceptance of negative PCR results and other exceptions for those who cannot get a vaccine, which he says “can harmonize the public health measures with basic rights.”

He added, "We are discussing with related ministries whether we should temporarily apply preventive virus measures such as limiting the number of people at facilities, such as hagwon, believed to be a high-risk place of infection, due to the court decision."

However, merits of an administrative litigation generally take several weeks to months to complete, so if the process takes too long it will likely have an impact on the implementation of the pass on minors, which is scheduled to take effect from March 1.

Last year, for instance, it took an average of 291.4 days for the first trial to be finalized, 227.3 days for appellate trial, and 144.9 days for the appeal hearing.

With only a few days left until the system includes large retail stores and department stores, which starts next Monday, Son said the court's recent decision to pause the pass system is not likely to impact such facilities.

“The recent court decision is in regards to the characteristics of three types of facilities including hagwon, combined with those facilities' users mainly being teenagers, so I don’t think discussions on [putting a hold on] the vaccine pass will be extended to other types of facilities,” the health official said.