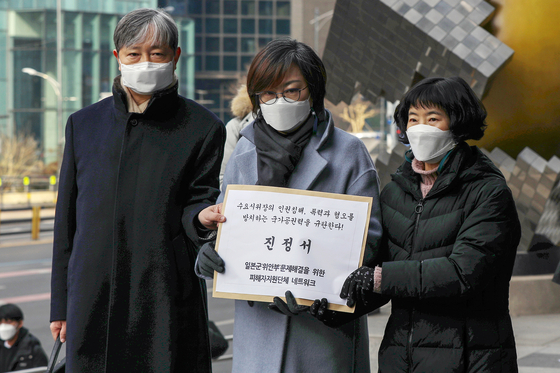 Lee Na-young, president of the Korean Council for Justice and Remembrance for the Issues of Military Sexual Slavery by Japan, center, holds up a petition submitted to the National Human Right Commission of Korea in front of the commission in central Seoul on Wednesday, requesting the commission to stop far-right groups from holding counter-rallies against the council’s weekly rallies near the Japanese Embassy in Seoul. [NEWS1]


Activists, advocating for the victims of Japan's wartime sexual slavery by holding weekly rallies near the Japanese Embassy in central Seoul, submitted a petition to the National Human Rights Commission of Korea on Wednesday, requesting they stop the counter-rallies hosted by far-right groups.

“Far-right groups have taken over the area for the Wednesday rallies since a year ago, denying the historical facts of the Japanese military sexual slavery and insulting and defaming the victims and the citizens who organize the Wednesday protests,” said an activist representing the Korean Council for Justice and Remembrance for the Issues of Military Sexual Slavery by Japan during a press conference hosted outside the commission headquarters in central Seoul.

“They have been threatening us for more than a year [and] the police are not using active restraints or taking appropriate measures,” the activist said. “We are urgently asking that the National Human Rights Commission take action to resolve this anti-human rights situation and the police inaction and make remedies based on the National Human Rights Commission of Korea Act.”

Article 48 of the act allows the commission to request the defendant, even before a decision has been doled out by the commission, cease an action alleged to be violating the rights of the plaintiff, once a petition on the matter is submitted to the commission.

The activist group has been holding their weekly Wednesday rallies near the Japanese Embassy in central Seoul, demanding an apology and compensation from Tokyo to the victims of Japanese military sexual slavery, euphemistically referred to as "comfort women," since 1992.

But in June 2020, conservative groups including one called Freedom Union began rallying at the same spot, demanding the Korean Council be scrapped. These counter rallies began as the council became mired in a controversy of financial mismanagement.

The controversy started after Lee Yong-soo, a 91-year-old former comfort woman, said in May 2020 that survivors had been politically and financially exploited by its former head, ruling Democratic Party (DP) Rep. Yoon Mee-hyang, for 30 years. Yoon was subsequently suspended of her DP membership and indicted for misappropriating donations intended to help the victims. Her trial is ongoing.

In Korea, groups hosting rallies report their rally schedule to the local police. Because the system works on a first-come, first-served basis, the conservative groups were able to secure the location by registering their rallies before the Korean Council.

“The [verbal] sexual harassment of the comfort women victims [by the conservative groups] is serious,” said Lee Na-young, president of the Korean Council, at the press conference on Wednesday. “The words they use to describe the comfort women victims are too vulgar, we cannot repeat them word by word here today. Their rallies are not about expressing what they believe in, but about obstructing the weekly Wednesday rallies of the council.”

The council held its weekly rally near the Japanese Embassy on Wednesday and marched to the Ministry of Foreign Affairs headquarters in central Seoul to commemorate the 30th anniversary of its rallies, which began on Jan. 8, 1992, according to the council. 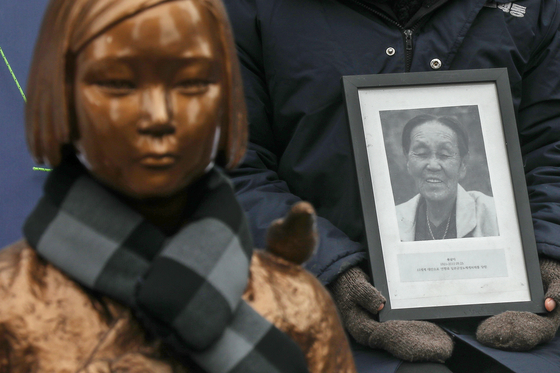 Students and members of civic groups supporting the victims of Japanese wartime sexual slavery hold up a photo of a late victim as they protest near the Japanese Embassy in Seoul on Wednesday, which marked the 30th anniversary of the weekly rallies. [NEWS1]