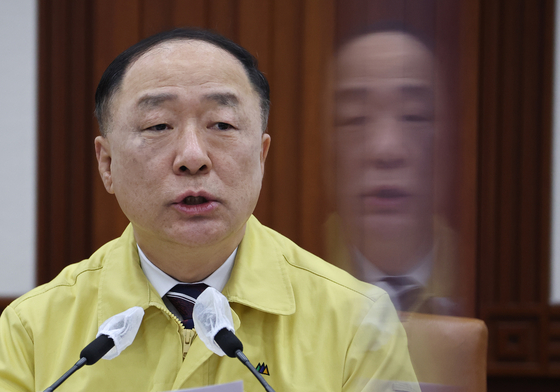 Finance Minsiter Hong Nam-ki announces supports for small businesses ahead of the Lunar New Year at the government meetign in Seoul on Thursday. [YONHAP]

Banks are being compelled by the administration to provide an additional 40 trillion won ($33 billion) in loans to small businesses as they struggle under restrictive social distancing regulations.

The 40 trillion won of support is separate from the 38 trillion won the government is allocating directly this year in the form of low-interest loans to small businesses.

It is also the time in which personal and business gifts are exchanged.

The government emphasized that the maximum ceiling on the holiday gifts to government employees, state-company employees and members of the press has been increased to 200,000 won from 100,000.

To boost consumption, the National Assembly last year passed an amendment to the Solicitation and Graft Act raising the ceiling.

Other government support includes the maximum limit on agriculture, fishery and livestock discount coupons being raised to 20,000 from 10,000.

President Moon Jae-in said he will be focused on supporting small businesses for the remainder of his term.

"Our administration's term now has four months left," Moon said during a cabinet meeting on Wednesday. "The government should do its best to compensate and support small businesses."