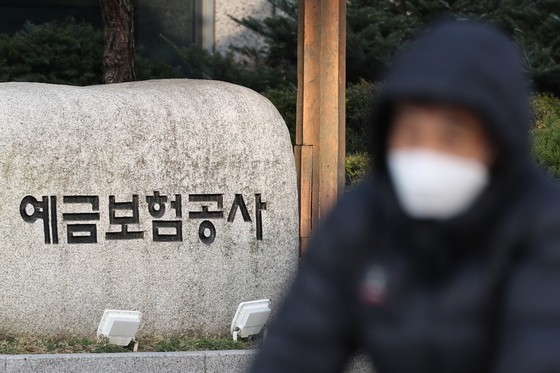 Korea Deposit Inusurance Corp. headquarters in Seoul on Thursday. The state-own financnial company will be one of the 131 public institutions where a labor representative will join the board of directors if a new reform bill passes the National Assembly next week. [YONHAP]

Concerns are growing after lawmakers passed a bill dictating that union representatives be seated on public companies' boards.

On Wednesday. ruling Democratic Party lawmakers on the Strategy and Finance Committee pushed through a bill dictating that a union representative must be included on public institutions’ boards of directors.

Committee members from the opposition People Power Party walked out in protest.

According to the bill, a union director will be placed on boards after being recommended by the head of a labor union or chosen by a vote of more than half the members of a union.

The union director's term will be two years and can be extended for another year.

The bill still needs to go through the Legislation and Judiciary Committee and then a vote by the National Assembly.

If passed, the system is expected to be adopted by 131 public corporations in the second half of the year, including the Korea Electric Power Corp. (Kepco), Incheon Airport Corp., the Korea Deposit Insurance Corp. and the Korea Housing Finance Corp.

Some 69.3 percent of employees in public corporations are members of a union compared to 11.3 percent in the private sector.

The Federation of Korean Trade Unions claimed the new system will ease labor and management tensions and reduce conflicts.

“It will lead to a true reform of public institutions by improving governance structures and realizing social value,” a statement by the group said.

A survey by the Korea Enterprise Federation in November 2021 of 200 scholars found that 90 percent believed the private sector would be pressured to adopt the same system.

Some 68 percent said unions would be further empowered and nearly 62 percent said they believed it would have a negative effect on private sector competitiveness.

Finance Minister Hong Nam-ki stressed that the bill is exclusively applied to the public sector as it is a change to the Act on the Management of Public Institutions.

“It is different from the Commercial Act [which applies to the private sector],” Hong said.

There is speculation that the bill was pushed by the DP for political reasons ahead of the presidential election in March.

Unions have been holding demonstrations against the Moon Jae-in government recently for its failure to keep a promise to raise the minimum wage to 10,000 won per hour.