LAS VEGAS -- With buzzwords metaverse and mobility consuming the world, Hyundai Motor has upped the stakes and mixed the two with metamobility.

A visit to the Korean automaker's pavilion at CES 2022 offers a sense of what this might mean, as the company promotes the notion of self-driving objects connected with a virtual world.


It begins with mobility modules, a wide variety of self-driving innovations.


The automaker aims to market them within two years, according to Hyun Dong-jin, vice president and head of the Robotics Lab at the Hyundai Motor Group.


In a demonstration conducted during the exhibit, the movement of a four-wheeled base called MobED is closer to that of a four-leg robot than a vehicle.


Since the company packed a motorized wheel, braking, steering and suspension into a single structure, the platform is capable of adjusting elevation, declination and tilt and making 360 degree turns in a fixed place. 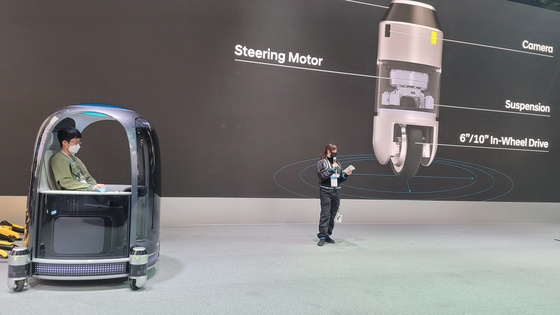 
The approach makes the architecture ideal to maintain a stable posture in the face of obstacles or tough road conditions since the set of modules gives more flexibility to adjust to different external conditions.


MobED can be customized.


"We made MobED compact in a way that allows users to integrate applications of their interest," Hyun told reporters at the booth.


"We presented use cases as a baby stroller, a camera stand and a delivery bot in the video," he said, "Users can take it to the workplace as MobED will be able to facilitate teleconferences." 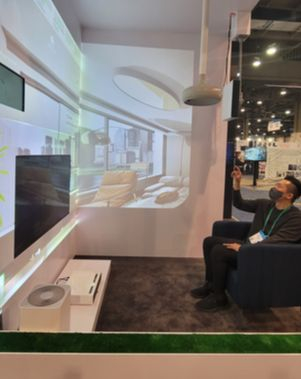 Kim Seok-joong, founder and CEO of Vtouch, simulates a system that allows for the control of machines using human gestures. [PARK EUN-JEE]


Also on display was an automotive system called Plug & Drive. While the underlying principle of Plug & Drive is similar with that of MobED, the architecture is tailored for a bigger bed capable of carrying a person in a seat.


A company employee rode a one-seater vehicle fitted with the Plug & Drive platform in the shape of a capsule. The highlight was several 360 degree turns in a quick sequence, which was effortlessly conducted with a joystick, a feature that traditional cars can't pull off.


The modular platform can be used in different settings, like in a warehouse or hotel, the carmaker said.


Vtouch, a Seoul-based start-up, demonstrated a technology that allows people to control appliances and machines without wearing clunky glasses and wearables. 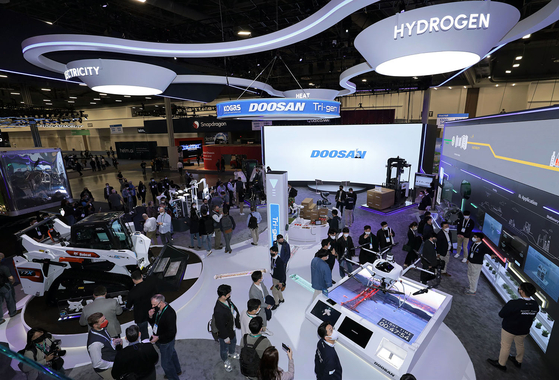 
Kim Seok-joong, founder & Co-CEO of Vtouch, took a seat on a sofa at the trade show and browsed the internet with hand gestures. The software processes data collected through three dimensional camera sensors installed in a digital device.


Vtouch's system is already in some of Hyundai Motor's models with autonomous-driving features.

"The technology allows for 'interactive reality,' which connects people with machines without putting on any other devices," Kim said.


Next to Hyundai’s pavilion is a two-story exhibit hall by Doosan Group, where robots playing drums greet visitors.

The core of Doosan’s exhibit is a Tri-gen fuel cell power generation system, which can generate hydrogen, electricity and heat at the same time.

The tower-shaped generator was seen providing hydrogen energy to a drone, electricity to an all-electric track loader and heat energy to a collaborative robot designed to help packaging apples.

The machinery-and-construction-focused group simulated the power system, which is currently on track to verify its function on-site after finishing indoor tests.