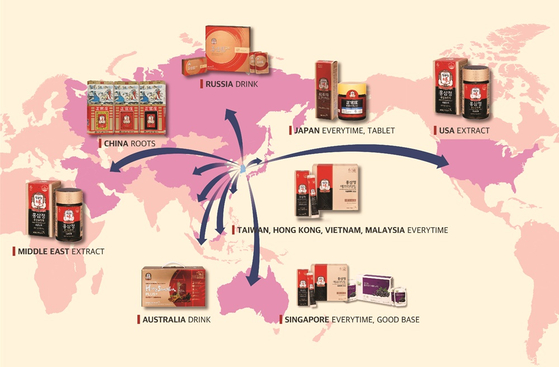 
Red ginseng is the latest product to be swept up in the Korean Wave, with the Korean Ginseng Corporation crediting the growing international popularity of its products to the global success of Korean dramas.

The Korea Ginseng Corporation announced Wednesday that overseas sales of its CheongKwanJang red ginseng products through the third quarter last year rose 20 percent on year. Despite the pandemic, overseas exports in 2020 rose 4.8 percent on year.

For the company, its biggest foreign market is China.

Ginseng is considered a popular holiday gift, and over 20 percent of Chinese sales occurred between January and February around the Lunar New Year.

Taiwan and Hong Kong are its second biggest markets, with Lunar New Year sales also accounting for 19 to 20 percent.

EveryTime — a thin pouch of red ginseng extract — was one of the most popular products worldwide. It was the best-selling KGC product in six countries — Taiwan, Hong Kong, Vietnam, Malaysia, Singapore and Japan.

“EveryTime is the best-selling product in Vietnam,” said a spokesperson for KGC. “Being a country where young people make up a large portion of the population, people tend to prefer products that are convenient to eat and carry around.”

“Korean dramas gained popularity abroad, and many locals [in Malaysia] expressed interest in EveryTime, which was often featured through product placements,” added the spokesperson.

The company added that many young consumers in Japan are also trying out the product after seeing it in Korean dramas. EveryTime recently appeared in the JTBC drama "Nevertheless" (2021) and "The King: Eternal Monarch" (2020).

In the United States, Korean Red Ginseng Extract was most popular.

The company says it does not have many physical stores in the United States — around 30 nationwide — so customers prefer to buy products with a long shelf life. A bottle of ginseng extract lasts some three months, according to the company, while a box of EveryTime lasts a month.

With overseas sales making up a growing portion of sales, KGC has been focusing on its e-commerce business. All of its foreign subsidiaries now have official e-commerce websites and also sell through Amazon, Shopee, China’s Tmall and Lazada in Southeast Asia.

“People around the globe became more interested in strengthening their immune system last year, and we were able to report positive results abroad,” said Kim Nae-soo, head of KGC’s Global CIC team. “Having a sense of duty that we represent Korea, we will do our best to introduce Korean ginseng to the world.”