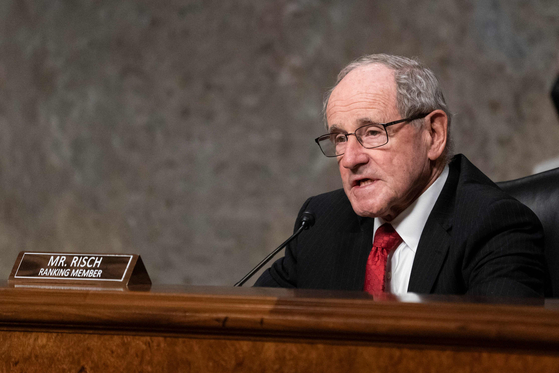 U.S. Sen. James Risch speaks during a hearing of the Senate Foreign Relations on Dec. 7, 2021. [AFP/YONHAP]


The U.S. Senate is publicly voicing its opposition to Seoul's proposal for a declaration to end the 1950-53 Korean War for the first time.

Sen. James Risch, a Republican of Idaho and a ranking member of the Senate Committee on Foreign Relations, told the Voice of America (VOA) Tuesday that he is "concerned" about the Moon Jae-in administration's proposal of an end-of-war declaration.

He said, "It will not make South Korea safer, and is a gift not only to North Korea, but also to China."

The VOA report published Thursday noted that this is the first time that concerns over an end-of-war declaration have been voiced within the U.S. Senate through the most senior Republican of the committee that oversees foreign relations and national security.

He said that the United States and South Korea "must demand more accountability from North Korea, not less," reflecting Washington's move to link human rights issues with denuclearization negotiations.

This counters the Moon administration's attempts to separate human rights, an issue Pyongyang has reacted sensitively to, from denuclearization talks which have been at an impasse since 2019.

In terms of Washington's policy direction on Pyongyang, the two senators urged the Joe Biden administration to prioritize joint military drills with Seoul and improving human rights in North Korea.

Risch said that the Biden administration "should ensure regular and consistent exercises with South Korea and Japan to deter North Korea and maintain military readiness."

Smith in turn urged Biden to appoint a special envoy for North Korean human rights, a position that remains vacant since January 2017, "to highlight the volatile and worsening human rights situation in the country."

The Biden administration also has yet to appoint a new U.S. ambassador to South Korea.

In early November, a group of 23 U.S. House lawmakers sent a letter to U.S. President Joe Biden urging him to "prioritize" engagement with North Korea and said that an "official end to the state of war between North Korea, South Korea, and the United States is not a concession to North Korea" but "a vital step towards peace."

It refers to Moon's call for a mutual declaration ending the state of war between the Koreas in the UN General Assembly September last year, noting that a peace treaty was never officially signed.

The letter was led by Democratic Rep. Brad Sherman of California, who introduced a bill in May that calls for diplomatic engagement with North Korea "in pursuit of a binding peace agreement constituting a formal end to the Korean War."

Seoul officials have cited the letter and the "Peace on the Korean Peninsula" bill as indicators of support from the United States for the end-of-war proposal.

However, both the letter and bill call for support of a "peace agreement," rather than a declaration.

The bill refers to the inter-Korean summit in Panmunjom on April 27, 2018, and calls on Congress to actively promote meetings "with a view to replacing the Armistice Agreement with a peace agreement and establishing a permanent and solid peace regime."

Experts differentiate between a symbolic end-of-war declaration, which can be revoked, and a binding peace agreement for a formal end to the war being raised by the United States.

There have been voices of skepticism within U.S. diplomatic circles and Congress on the legal consequences of an end-of-war declaration and questions on what it could mean regarding the stationing of U.S. troops in Korea.

The letter expressed "grave concern" that such a declaration "would seriously undermine and destabilize the security" on the Korean Peninsula.

South Korean Foreign Minister Chung Eui-yong in turn said in a press conference late December that Seoul and Washington have "effectively reached an agreement on a draft text" on an end-of-war declaration.

However, the U.S. State Department has not separately confirmed the progress of such end-of-war consultations. Seoul's plans have been further complicated amid tense Sino-U.S. relations and a U.S. diplomatic boycott of the Beijing Winter Olympics, as China is another key player.

When asked if Washington is resorting back to a strategic patience strategy toward Pyongyang, State Department spokesman Ned Price said in a press briefing on Dec. 28, "We have made clear through our public messaging, and private messaging as well, that we are ready, willing, and able to engage in this diplomacy," calling for the North to "respond positively to that outreach."