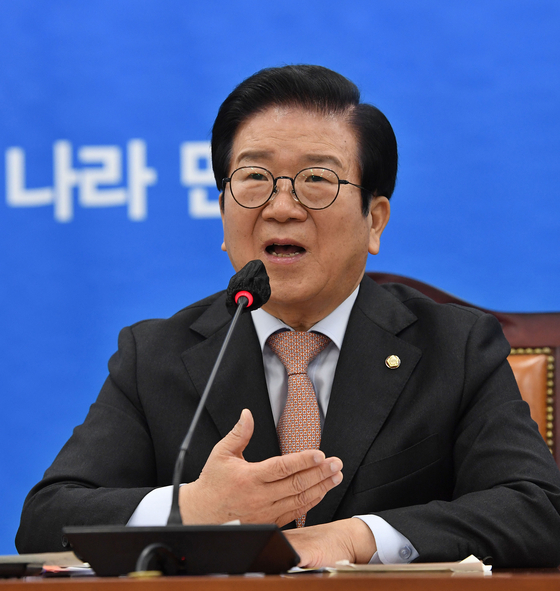 
National Assembly speaker Park Byeong-seug on Thursday called for a constitutional reform to follow immediately after the presidential election in March.

"The solution for the political divide we are seeing today between the conservative and liberal bloc is to reform the Constitution, so that the Assembly and the political power structure are truly able to reflect the public's choice and voice," Park said during an online press conference on Thursday.

"I call on the presidential candidates to tell the public their thoughts on constitutional reform, and we should get the reform going right after the election."

The revision that followed created a presidential system of five-year terms with no option for re-election.

President Moon Jae-in during his campaign five years ago had promised constitutional amendments that would change the presidential system and devolve more powers from the central government to local governments. None were reached during his tenure, which is coming to an end in two months.

Park said the constitutional reform should address the so-called “winner-takes-all” system in Korea.

“Last year, the Assembly ran a special committee on national unity, where liberal and conservative scholars put their heads together to find solutions to address the social divide today,” Park said. “The committee concluded that what we needed the most was a political reform […] especially on revamping the winner-takes-all political power structure.”

After Moon was elected president in 2017, the general election that followed in 2020 resulted in a landslide victory for the ruling Democratic Party, which, with a satellite party, won 180 seats out of the 300-member Assembly.

With the majority, the DP and its satellite party could pass any bills other than a constitutional amendment. To pass bills, the Assembly requires a majority of all members to be present, and the concurring vote of a majority of the members present.

A revision to the Constitution, however, requires a concurring vote by two-thirds of all lawmakers.

Calls to revise the Constitution to change Korea’s single-term, five-year presidency and its two-party system have been made repeatedly over the years, including during the tenures of former presidents Roh Moo-hyun, Lee Myung-bak and Park Geun-hye.

“There’s a pattern behind why we always talk about the need to reform the Constitution but never actually do it,” Park said. “Newly elected presidents are afraid to work on constitutional reform from the start of their presidency because they feel they have other pressing agenda they need to work on first, so they push the topic until the later years. But when they’ve pushed through their more immediate agendas, it’s time for the next presidential election and the leaders shy away from talking about this for fear it may influence the election.”

Park added that a nationwide discussion on the topic should take place as soon as the presidential election is over, so as to have enough such agendas ready to push through before the local elections for heads of local governments by June this year.