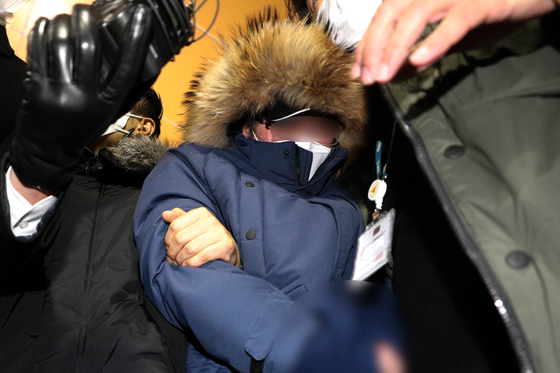 An employee of Osstem Implant, only identified by the surname Lee, is taken to Gangseo Police Precinct in Seoul in the early hours on Thursday for questioning over charges that he embezzled 188 billion won ($158 million) from his company. [NEWS1]


Police on Wednesday night in Paju, Gyeonggi, arrested the employee of dental implant manufacturer Osstem Implant at the center of Korea's largest case of embezzlement.

The suspect, a 45-year-old employee of Osstem Implant who has been identified only by his surname Lee, was taken into custody on suspicion of embezzling 188 billion won ($158 million) from his company.

He was caught not in the apartment where he lived, but in a fourth-floor unit in the same building that was recently vacated by another tenant.

Lee was reported by Osstem on Dec. 31 for embezzling over 90 percent of the company’s equity of 205 billion won while he was working as the manager of its finance department, according to a regulatory filing submitted by the company.

Police said Lee has already admitted to the embezzlement.

According to Osstem, Lee transferred company money to his personal bank account and forged bank statements to show that the funds were still in the company account.

Osstem Implant's stock has been suspended from trading on the Kosdaq market in light of the huge embezzlement.

Police partially confirmed reports by Money Today and the Financial News that Lee used the funds he embezzled to purchase stocks in Dongjin Semichem, a manufacturer of chemicals used in semiconductors and electronics displays, and added that Lee also bought 851 1-kilogram (2.2-pound) gold bars from the Korea Gold Exchange from Dec. 18 to 28.

The gold bars bought by Lee are estimated to be worth 68 billion won.

However, the estimated value of all the gold bars and stocks bought by Lee add up to only tens of billions of won.

Police on Wednesday recovered 450 gold bars during their raid of Lee’s home — an amount that was carried out in 22 boxes by investigators. Police are currently tracking the whereabouts of the remaining 401 bars.

Police also suspect that Lee may have lost 30 billion won after buying shares in Dongjin Semichem in October and apparently reselling almost all of the stocks in December for less.

While Osstem insists that Lee acted alone, police are working to find out if he had accomplices as they suspect the funds were too much for a single employee to steal without help.

Suspicions also abound over why Lee personally visited the gold exchange to buy easily traceable gold bars, and why he did not try to evade police capture by hiding somewhere other than the same building where he lived.

Police investigators were able track Lee’s movements by analyzing surveillance cameras near the exchange where he purchased the ingots.

Police plan to file a formal arrest warrant for Lee later this week after further questioning him about the existence of accomplices in the case and the whereabouts of the missing funds and gold bars.

Established in 1997, Osstem Implant is Korea's largest manufacturer of dental implants. It generated 103.5 billion won in net profit in 2020 and 631.6 billion won in revenue.