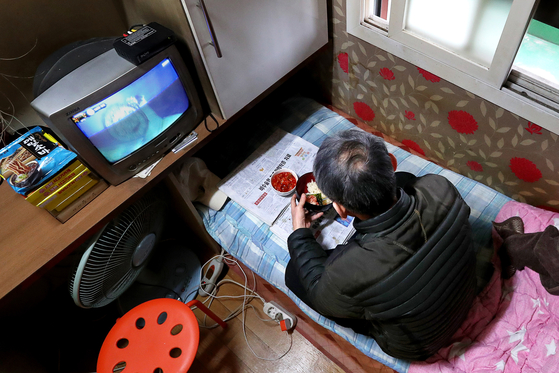 A man eats breakfast alone at a gosiwon, or a very small room rented out cheaply to students preparing for exams, on New Year’s Day in 2019. [JANG JIN-YOUNG]

JANG JOO-YOUNG
The author is a national news editor of the JoongAng Ilbo.

“It was a space more the size of a coffin than a room,” wrote Park Min-gyu in his short story titled “Staying at Gap-eul Gosiwon” (2005), describing a gosiwon — a very small room rented out cheaply to students preparing for exams.

The protagonist doubles up with a friend after his father’s bankruptcy and then moves to a room in a gosiwon, paying 90,000 won ($75) a month. A few years later, the protagonist leaves the gosiwon, gets a job, and gets married. But even after time went by, the tough life became vivid through the choice of the word “coffin.”

A gosiwon is mostly made of small rooms of approximately 6.6 square meters (71 square feet). Related laws define gosiwon as facilities for students to study in sectioned rooms providing lodging.

However, times have changed and students now prefer pleasant studios rather than shabby gosiwon. Instead, gosiwon are now filled with socially disadvantaged groups.

It often leads to catastrophe when a fire breaks out in a gosiwon with tightly packed rooms. A fire at a gosiwon in Jongno-gu, central Seoul in 2018 left seven dead and eleven injured.

Damage was especially serious as most of the victims lived in rooms with no windows. Police investigations showed that the fire started from an electric heater used by a resident in his 70s. Outdated facilities with poor lighting and heating and no sprinkler system triggered the accident.

To prevent such disasters, Seoul revised its building and residential codes so that a window can be installed in each room. Also, a room should be at least 7 pyeong — or 9 pyeong if a bathroom is included.

It is a late, but just, decision. On top of this, policies on welfare in general, including support for gosiwon residents, must be reinforced.

If the authorities sit back after only making a few windows, gosiwon may become “coffins with a bit of natural light.”

Time to build a consensus (KOR)