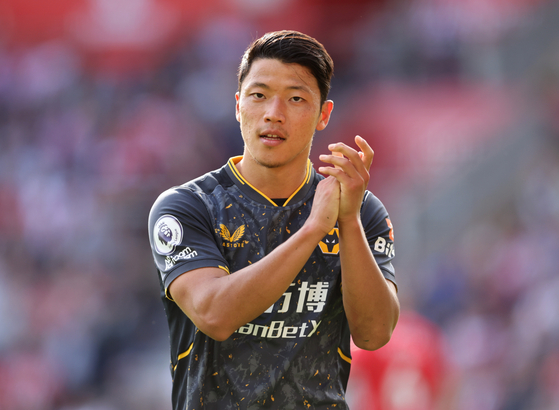 
Wolverhampton Wanderers striker Hwang Hee-chan may have to wait a little longer before the club offers him a permanent contract, with British football pundits predicting that Wolves are likely to hold off until the summer transfer window before signing the Korean forward.

Hwang is currently playing for Wolves on a season-long loan from RB Leipzig. The club maintain the option to buy his contract, and have made it clear that such a deal could be on the table. But while Wolves had been expected to potentially consider making the move permanent during the current January transfer window, it now looks like that may not happen before the summer.

While that injury doesn't seem to have changed the club's opinion — manager Bruno Lage told reporters last week that nothing has changed — the long absence could well have persuaded Wolves, and any other teams interested in Hwang, that it is better to wait for him to return to the pitch before making anything permanent.

If that is the case, it won't have any immediate impact on Hwang. The Korean striker maintains his position on loan to the Premier League club for the rest of the season and, if he is able to continue to impress, a deal could be on the table in the summer.

The Premier League transfer window will close at midnight on Jan. 31.

As well as missing out on a score of Wolves games, Hwang's injury will likely take him out of Korea's next two World Cup qualifiers, against Lebanon on Jan. 27 and Syria on Feb. 1.