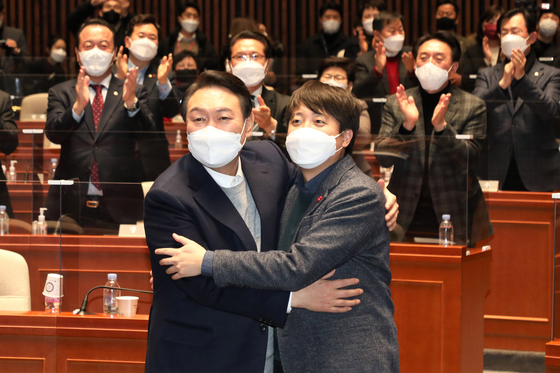 “We will strive to work together as one mind and one thought, and carry out the work requested by the people,” said Yoon in meeting with the press after a closed-door meeting with the members of the PPP.

Lee, who also joined the meeting, told the press that he and Yoon have decided to meet each other half-way.

“We believe that we have been able to reach a meeting point, after we have considered many differences,” Lee told the press. “I apologize for disappointing the public thus far, and we pledge to win the election together.”

The Lee-Yoon feud has been running for weeks, resulting in a power struggle that contributed to the malfunctioning of the election campaign committee even before its official launch on Dec. 6. The party chief boycotted activities in early December to protest the influence of Yoon's aides on campaign appointments.

Lee particularly disagreed with Yoon over his nomination of Rep. Kwon Young-se as the party's new secretary general and Rep. Lee Chul-gyu as a strategic planning chief. Despite Lee’s opposition, Yoon went ahead and appointed them during a meeting earlier on Thursday morning.

The feud appeared to continue that afternoon, as PPP lawmakers continued to criticize Lee in their party representatives' meeting and asked him to resign as party chairman. Lee, also present in the meeting, continued to respond to these calls, arguing why he should stay.

Yoon was not part of the meeting because he is not a PPP representative.


But then Yoon walked into the meeting around 7:50 p.m.

“I am sorry to be barging into the meeting,” he reportedly told the members. “But everything is my fault […] I hope that we can put our misunderstandings behind us and move forward for victory in elections.”

He added that Lee should stay on as chairman, and as he finished, his brief speech was received with an applause from the members present.

Lee responded to Yoon’s speech positively, stating that he “never doubted Yoon” and vowed to work with him for the good of the election.

After Yoon and Lee made up, the PPP members who had proposed a resolution demanding Lee's resignation as party chairman revoked the plan.

Lee then offered to drive Yoon himself to his next schedule, which was a visit to the relatives of a firefighter who died fighting a fire at a seven-story refrigeration warehouse construction site in Pyeongtaek, Gyeonggi, on Thursday.

Yoon pulls campaign back from the brink