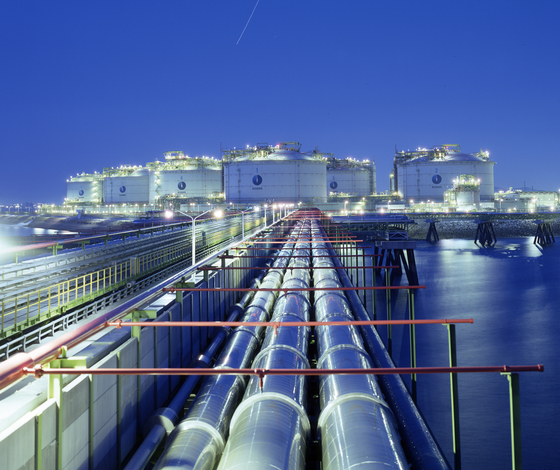 Near the end of 2021 the world was grappling with surging energy prices as Russia threatened to turn off gas pipelines to European countries over geopolitical tensions regarding Ukraine.

Gas prices, which seemed to have been stabilizing at the beginning of the year, are again showing signs of accelerating including in the U.S. as temperatures dropped.


Gas is currently one of the world’s biggest energy sources, accounting for 23 percent of global primary energy demand and nearly a quarter of electricity generation, according to the International Energy Agency (IEA).


Natural gas in 2022 is expected to become one of the key energy sources with demand growing rapidly as countries, including Korea, are committed to aggressive cutbacks on carbon emissions.


Natural gas not only releases the least carbon dioxide among fossil fuels but it is also economical. Carbon dioxide emitted from combustion of natural gas is roughly half of coal and 30 percent less than burning oil.

Not only has natural gas become the second-largest energy source, it is also the No.1 source for electric power generation in several countries including the U.S.


Clean hydrogen gas development is expected to expand this year with Korea announcing last month plans to produce 27.9 million tons of “blue” and “green” hydrogen gas by 2050 as part of its carbon neutrality goal.


Although hydrogen is considered the cleanest source of energy as its only by-product is water, the process to produce hydrogen is not so clean.


The cleanest hydrogen is green hydrogen, which emits no carbon in the process of its production. The hydrogen itself is produced through clean renewable energy.

The process of manufacturing blue hydrogen is similar to that of grey hydrogen. They are both produced through a carbon emitting process that includes the burning of liquefied natural gas (LNG).


However, in the case of blue hydrogen, the carbon emitted is captured and utilized, creating a semi-clean hydrogen production process.


While technologies are still in development and private companies including SK E&S have announced plans to dive into those technologies, many are setting their sights on the hydrogen economy.


The Korean government laid out a plan last month to increase the use of such clean hydrogen gas to 60 percent of the total by 2050.

So far 44 countries, including Korea and even China, which is responsible for the largest amount of the world’s carbon emissions, have pledged commitment to net-zero carbon emissions around 2050.

According to the IEA’s estimate, in order to reach net-zero carbon emissions by 2050, renewable energy has to be increased to 60 percent from the current 10 percent in the energy mix while the use of fossil fuel has to be cut from 80 percent to 20 percent.

Korea was one of the first countries to lay out plans to aggressively increase its renewable energy consumption.

The Moon Jae-in government from its first year in office announced an energy policy of raising the shares of renewable energy to 20 percent by 2030.

Although, renewable energy shares in recent years have increased significantly and many countries have been active in utilizing solar and wind power to realize their goals, roughly 60 percent of the world’s energy still relies on fossil fuel.

The biggest concern related to renewable energy is that it is still considered unreliable not only in terms of production but also because it faces the problem of being intermittent.

While an outdated power grid was considered the primary cause of a blackout in Texas last year that even halted Samsung's production plant, frozen wind turbines and solar panels were also blamed. Renewable energy accounts for 23 percent of Texas energy source.

Many expect natural gas to become a major energy source until renewable energy, including clean hydrogen technologies, have the ability to replace current energy sources.

The IEA roadmap to carbon neutrality by 2050 proposes shares of low-carbon gas such as bio methane and hydrogen to be raised to 20 percent by 2030 and to 80 percent by 2050.

Natural gas is considered the most versatile fuel among current energy sources as it not only provides heat and is used in cooking but can also be generated into electricity and used as transportation fuel.

“Natural gas is considered the bridge fuel in the transition toward hydrogen economy,” said Choi Jae-hak, head of sales and strategy department at the Korea City Gas Association. “The technology and cost problems in achieving carbon neutrality by 2050 will be eased through the reuse of natural gas pipelines in supplying hydrogen gas.

“[Also] by transitioning high-carbon emitting fuels such as coal and gasoline to natural gas, various problems that could emerge before securing the foundation for renewable energy supplies could be solved.”

LNG drive in the private sector

Among leading Korean business groups, SK is one of the most aggressive.

In October, during a meeting among top SK executives, the group’s chairman Chey Tae-won announced a plan for SK businesses to reduce their carbon emissions by 200 million tonnes by 2030.

One of the company's key energy subsidiaries with an aggressive plan is SK E&S.

It is the largest private LNG company in Korea, importing 3 million tonnes a year.

SK E&S in September laid out a grand plan of transforming into a major clean energy supplier whose value could reach 35 trillion won by 2025.


The plans include securing 10 million tonnes of clean LNG and 280,000 tonnes of hydrogen and generating 7 gigawatts of electricity via renewable sources.


SK E&S is planning of expanding its LNG terminals overseas including China and South America.


“SK E&S will not settle as the country’s No.1 supplier of city gas but challenge the LNG business by becoming the first private company to succeed in completing the world’s first and biggest LNG value chain,” Choo added.


The company in March last year announced its decision to invest 1.6 trillion won over the next five years in the development of the Barossa gas field on the northern coast of Australia.

GS Energy has recently been expanding its business overseas including becoming the first Korean company to be selected to build and operate a LNG power plant in Vietnam last year.


Some 3.5 trillion won will be invested in the project, building two LNG power plants generating a combined 3 megawatts of electricity.

The power plants are expected to go into operation from 2026.

The company said it plans to set up an LNG value chain in Vietnam, which will include storage and vaporization facilities.

The company, along with Tokyo Gas, was the first in the world to receive carbon neutral LNG cargo from the Dutch company Shell in 2019.

Kogas in 2020 reduced its carbon emissions produced in the process of its LNG value chain.

The efforts included improvement in the LNG vaporization system and reuse of unused energy, which are surplus energies that were previously wasted.

According to the company in the process of vaporizing LNG from minus 162 degrees Celsius to 0 degrees Celsius, 200 kilocalories of cold energy is generated per 1 kilogram of LNG.


Cold energy can be reused in freezing technologies that could conserve 50 to 70 percent of electricity used in deep freezing.

Kogas plans to establish a frozen storage system that runs 100 percent on LNG cold energy at the port in Incheon.

Not only could such facility store frozen food but it could also be used to stockpile medical drugs.

The shipbuilding industry has recently been enjoying a huge surge in orders for LNG vessels and the global movement toward carbon emissions cutbacks is expected to further fuel this trend.

According to the Ministry of Trade, Industry and Energy, Korea in 2021 secured 17.4 million compensated gross tonnage (CGT) of new ship orders in volume. That’s the biggest amount in eight years. In 2013 orders amounted to 18.5 million CGT.


Korea while lost its position as No.1 shipbuilder in the world by volume to China last year, it still holds the second place in market share with 37 percent and leads in high value-added orders such as LNG vessels.


Among orders for environmentally-friendly vessels that Korea secured, 82 percent are LNG.


Demand for natural gas is growing.

Natural gas consumption in Korea in the first seven months of 2021 saw a 17 percent increase year-on-year thanks to economic recovery and the government policy of phasing out nuclear reactors.


LNG in the first half of 2021 accounted for 32 percent of electricity generated, becoming the second largest energy source after coal with 33 percent.


This is a stark contrast to nuclear energy, whose contribution fell from 31 percent in the first half of 2020 to 28.3 percent last year.


“The future of LNG compared with other fossil fuel is more favorable, and it is likely to emerge as an alternative to coal until the mid-2020s,” said Chang Woo-seok, researcher at Hyundai Research Institute.

The researcher projected demand in Asia to surge with many countries, including Vietnam and Indonesia, which relied heavily on coal for electricity, making the switch to natural gas.


Natural gas investment is likely to see an uptick starting this year as the European Commission is expected to officially label nuclear and natural gas as “green investment,” within this month.


The EU regulator will reportedly label natural gas as a “transitional” energy and apply stricter conditions than nuclear energy.

The Korean government in July was able to secure a stable supply of gas from Qatar.

Kogas signed a contract that sees 2 million tonnes of natural gas supplied to Korea annually between 2025 and 2044.


Qatar is Korea’s biggest supplier of natural gas. Korea imported 9 million tonnes in 2019, which is 23 percent of all the natural gas that Korea imports from overseas.

Australia trails behind, accounting for 20 percent or nearly 8 million while 5.8 million tonnes is imported from the U.S.

Korea’s current contract with the UAE expires in 2024.


“The long-term contract is meaningful on the grounds that we have been able to secure a stable supply of natural gas at a competitive price when local demands have been increasing not only due to an increase in electricity consumption but also due to [the transition toward] hydrogen economy,” said Yoo Beop-min, director of raw materials industry policy at the Ministry of Trade, Industry and Energy.

To meet growing demand, the Korean government said it plans to secure storage with a total capacity of 18.4 million kiloliters by 2034 including constructing a fifth LNG facility in Dangjin, South Chungcheong.


As of 2020 Korea’s storage facilities have the capacity to hold 13.7 million kiloliters. Kogas takes up 89 percent.