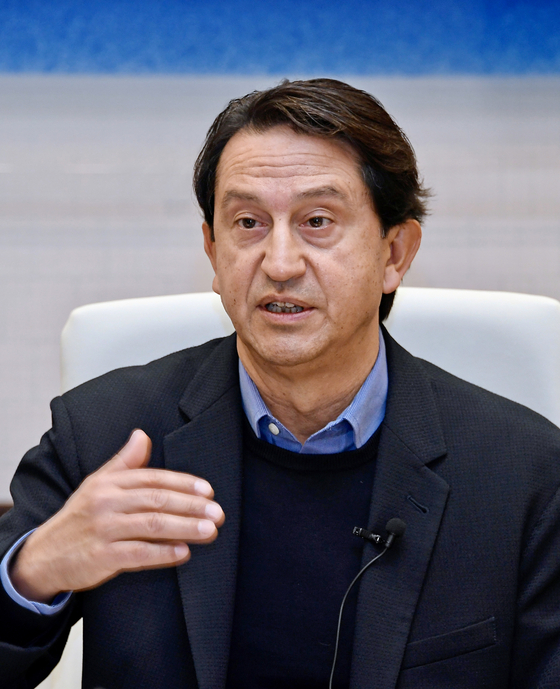 
LAS VEGAS — Trends in the automotive business are quickly changing in the United States with sedans giving way to SUVs as the era of the internal combustion engine slowly comes to a close.

Jose Munoz, global chief operating officer (COO) of Hyundai Motor, is handling the critical task of building the presence of the Korean automaker in the world's second largest automobile market.

Hyundai Motor is attempting to further solidify its foothold in the U.S. with more EVs and through its Genesis marque. Last year, the company committed a total of $7.4 billion of investment in the U.S. through 2025.

In an interview conducted at the CES 2022, which was held in Las Vegas through Jan. 7, Munoz shared the company's strategy to remain competitive as the auto market changes so dramatically.

Q. How competitive is Hyundai Motor in EVs and SUVs?

A. Well, I think, first and foremost, we have now the best portfolio that we have ever had, and I think we are preparing to be very competitive in the U.S. market based upon the big trends of the market. One of the big trends of the U.S. market, everybody knows, is the SUV growth. So with the launch of our SUV and the focus that we have put in developing these vehicles with the launch of the new Tucson the new Santa Fe and also the Santa Cruz, we have been able to get to around 65 percent, a mix of SUVs.

If we just look back a few years, we were about 35 to 37 percent. Other big trend in the U.S. market is the electrification. So we put a specific focus and I'm very, very pleased to see two things. Now, the total mix of the green cars -- including fuel cells and EV plug-in hybrids -- is about 10 percent of our total sales. And then battery EV sales have grown more than 130 percent year over year.

So, we are really well equipped. We are really getting ready to support the 40 to 50 percent mix of battery EV sales in the US market by 2030. The third trend is the luxury. And this is also a big achievement by the group. We focus on Genesis and becoming a true luxury brand. And then not only we have tripled our sales year-over-year, but I'm very proud that our consumer-facing transaction price, as per JD Power, a so-called PIN, is above big competitors like BMW, like Audi, Lexus. So, this is remarkable. And it's not about pushing sales, but the really important consumer-facing transaction price.


What is the biggest challenge for growing Hyundai Motor's standing in the U.S.?

We are in a very uncertain market situation with uncertain supply due to the chip shortage and also logistic challenges. Those are the biggest challenges for us as well. However, in 2021 we had the same challenge, and our company has done better than others. I think our global headquarters have done a very good job in optimizing the supply and the production by being more flexible than our competitors. And then we have done the same in the U.S.

The percentage of lost production has been lower than that of our competitors. If you remember when the pandemic started, we were the last ones who had to shut down the plant. We were the first ones to resume production. We have been able to change the way we operate to adjust the production plants to the available parts, which has allowed us to have better supply than others.

Is Hyundai Motor planning to expand charging infrastructure in the U.S.?

Charging infrastructure, we know, is a big enabler to increase sales of the battery EV. One of the activities the Biden administration has announced: they're going to open about 500,000 EV stations in the near future. So, what we have done is the following.

First, we have made an agreement with Electrify America and then, as an example, an Ioniq 5 that we just launched in the market is going to allow the customers to charge at low cost for two years. I think that's important. We are very confident that if this plan is successful, we may expand to other models. We actually started with Kona, and it was quite successful.

And then I want you to know as well that we are not only working on battery EVs, but also ensuring that for fuel cell EV sales, we will also expand our charging infrastructure. In addition, we are launching Ioniq as a sub-brand in the U.S. We have a determined selectivity criteria for those Hyundai dealers who are going to be an Ioniq 5 dealer. So, not all Hyundai dealers would be Ioniq dealers. One of the criteria to become an Ioniq dealer is to provide charging infrastructure.

How is Hyundai Motor's plan to produce EVs in the U.S. going? And is there any plan to ramp up production capacity in the existing Alabama and Georgia factories?

So, as you know, last year when Korean President Moon visited the White House, he met with the president Biden, and as part of the South Korean multi-national company's announcements, Hyundai Motor Group announced $7.4 billion of investments through 2025. As part of these investments, we announced not only we would support future business, such as urban air mobility, Boston Dynamics, but also EV production in the U.S. We are working on developing concrete plans, which we will announce soon. But what I can confirm to you right now is that we will produce EV vehicles in the U.S., without a doubt.

Unfortunately, some U.S. consumers still appear to mistake Hyundai Motor for Honda. How can Hyundai strengthen its brand reputation in the market?

I think the only point that I would like to stress is that we have overtaken Honda as a group [in the U.S.]. So, we're very proud of that. It just happened naturally by working hard. We have been able to be the second Asian brand in the US market only after Toyota. Basically, we have the domestics and then Toyota ahead of us and then we are barely started.

So, we have a lot of opportunity to continue to grow. And while there is still a lot of potential and we need to close the gap on several of the dimensions, we're making good progress, which is creating a natural demand which has allowed us to have a very strong retail performance. So the most important indicator for us is the overall opinion. And then the launch of the new Tucson, the launch of the Santa Cruz, the Ioniq 5, but also on the GV 70, 80, and very soon GV 60 on the Genesis brand are helping. But I would say that the Hyundai Motor Group has really, really a lot of strengths which the competitors are seeing.