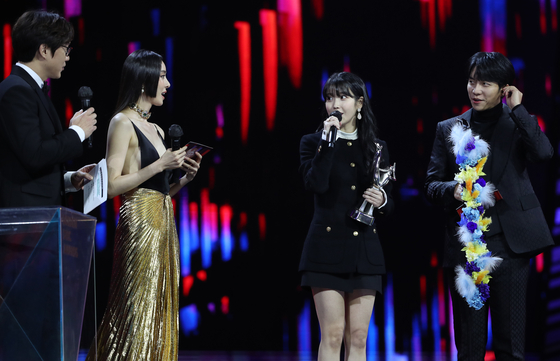 
K-pop singer IU, second from right, gives a speech after winning the top prize in the digital song category of the 36th Golden Disc Awards, in a ceremony held at Gocheok Sky Dome in Guro District, southwestern Seoul, on Saturday. IU, whose real name is Lee Ji-eun, won the Digital Song of the Year honor for the second consecutive year in the annual music awards by TV channel JTBC, this time with her hit song "Celebrity." The Album of the Year award went to K-pop phenomenon BTS. Girl groups aespa and STAYC shared the award for top rookie.   [ILGAN SPORTS]