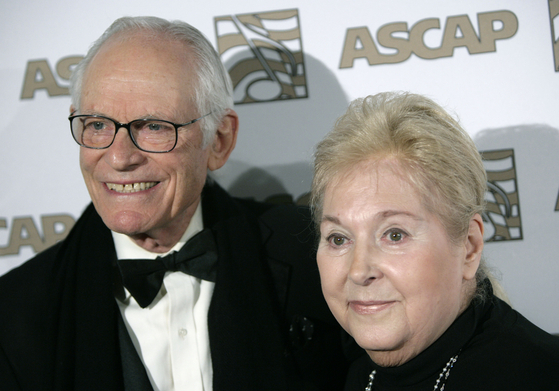 
NEW YORK - Marilyn Bergman, the Oscar-winning lyricist who teamed with husband Alan Bergman on "The Way We Were,'' "How Do You Keep the Music Playing?'' and hundreds of other songs, died at her Los Angeles home Saturday. She was 93.

She died of respiratory failure not related to Covid-19, according to a representative, Jason Lee. Her husband was at her bedside when she died.

The Bergmans, who married in 1958, were among the most enduring, successful and productive songwriting partnerships, specializing in introspective ballads for film, television and the stage that combined the romance of Tin Pan Alley with the polish of contemporary pop. They worked with some of the world's top melodists, including Marvin Hamlisch, Cy Coleman and Michel Legrand, and were covered by some of the world's greatest singers, from Frank Sinatra and Barbra Streisand to Aretha Franklin and Michael Jackson.

"If one really is serious about wanting to write songs that are original, that really speak to people, you have to feel like you created something that wasn't there before _ which is the ultimate accomplishment, isn't it?'' Marilyn Bergman told The Huffington Post in 2013. "And to make something that wasn't there before, you have to know what came before you."

Their songs included the sentimental Streisand-Neil Diamond duet "You Don't Bring Me Flowers,'' Sinatra's snappy "Nice 'n' Easy'' and Dean Martin's dreamy "Sleep Warm.'' They helped write the up-tempo themes to the 1970s sitcoms "Maude'' and "Good Times'' and collaborated on words and music for the 1978 Broadway show "Ballroom."

But they were best known for their contributions to films, turning out themes sometimes remembered more than the movies themselves. Among the highlights: Stephen Bishop's "It Might Be You,'' from "Tootsie''; Noel Harrison's "The Windmills of Your Mind,'' from "The Thomas Crown Affair''; and, for "Best Friends,'' the James Ingram-Patti Austin duet "How Do You Keep the Music Playing?"

Their peak was "The Way We Were,'' from the Streisand-Robert Redford romantic drama of the same name. Set to Hamlisch's moody, pensive melody, with Streisand's voice rising throughout, it was the top-selling song of 1974 and an instant standard, proof that well into the rock era the public still embraced an old-fashioned ballad.

Fans would have struggled to identify a picture of the Bergmans, or even recognize their names, but they had no trouble summoning the words to "The Way We Were'':

"Memories, may be beautiful and yet / What's too painful to remember / We simply choose to forget / So it's the laughter / We will remember / Whenever we remember / The way we were.''

The Bergmans won three Oscars -- for "The Way We Were,'' "Windmills of Your Mind'' and the soundtrack to Streisand's "Yentl'' -- and received 16 nominations, three of them in 1983 alone. They also won two Grammys and four Emmys and were inducted into the Songwriters Hall of Fame.

Fellow composer Quincy Jones called news of her death crushing. "You, along with your beloved Alan, were the epitome of Nadia Boulanger's belief that 'an artist can never be more or less than they are as a human being,''' he tweeted.

"To those of us who loved the Bergmans' lyrics, Marilyn takes a bit our our hearts and souls with her today,'' tweeted Norman Lear, creator of "Maude'' and "Good Times."

Marilyn Bergman became the first woman elected to the American Society of Composers, Authors and Publishers and later served as the chair and president. She was also the first chair of the National Recorded Sound Preservation Board of the Library of Congress.

Streisand worked with them throughout her career, recording more than 60 of their songs and dedicating an entire album, "What Matters Most,'' to their material. The Bergmans met her when she was 18, a nightclub singer, and soon became close friends.

"I just love their words, I love the sentiment, I love their exploration of love and relationships,'' Streisand told The Associated Press in 2011.

On Saturday, she posted a picture of herself with the Bergmans on Twitter, saying they were like family, as well as brilliant lyricists.

"We met over 60 years ago backstage at a little nightclub, and never stopped loving each other and working together,'' Streisand wrote. "Their songs are timeless, and so is our love. May she rest in peace."

Like Streisand, the Bergmans were Jews from lower-middle-class families in Brooklyn. They were born in the same hospital, Alan four years earlier than Marilyn, whose unmarried name was Katz, and they were raised in the same neighborhood and were fans of music and movies since childhood. They both moved to Los Angeles in 1950 -- Marilyn had studied English and psychology at New York University -- but didn't meet until a few years later, when they were working for the same composer.

The Bergmans appeared to be free of the boundaries and tensions of many songwriting teams. They likened their chemistry to housework (one washes, one dries) or to baseball (pitching and catching), and were so in tune with each other that they struggled to recall who wrote a given lyric.

"Our partnership as writers or as husband and wife?'' Marilyn told The Huffington Post when asked about their relationship. "I think the aspects of both are the same: Respect, trust, all of that is necessary in a writing partnership or a business partnership or in a marriage."

Besides her husband, Bergman is survived by their daughter, Julie Bergman.