Presidential candidates from left: Lee Jae-myung of the Democratic Party, Yoon Suk-yeol of the People Power Party, and Ahn Cheol-soo of the People's Party [YONHAP]


As the dueling presidential campaigns of the ruling Democratic Party's (DP) Lee Jae-myung and the main opposition People Power Party's (PPP) Yoon Suk-yeol take an increasingly negative turn, a long-shot contender for the March presidential race is rising in the polls on the back of young swing voters — mostly, it seems, at the expense of Yoon.

Although Ahn Cheol-soo, chairman of the minor opposition People's Party and a former software entrepreneur, faces a crowded field that includes not only Lee and Yoon but also Sim Sang-jung of the minor progressive Justice Party, his candidacy appears to be getting a second glance from voters as the two major candidates face a torrent of negative scrutiny regarding their families.

Support for Ahn at 10.1 percent still pales in comparison to that for Lee and Yoon, who respectively recorded 39.4 and 29.9 percent support in an Embrain survey of 1,010 adults commissioned by the JoongAng Ilbo conducted on Dec. 30 and 31. The survey had a 3.1 percent margin of error and a confidence level of 95 percent.

However, the December survey showed that Ahn gained 4 more percentage points in support since a JoongAng Ilbo survey of 3,023 adults conducted from Nov. 22 to 26, while support for Yoon fell by 9 percent.

The swing appears especially pronounced among younger voters born in the 1980s and '90s — the so-called “2030 generation,” referring to those now in their 20s and 30s — who have turned increasingly away from Yoon over allegations that his wife, Kim Keon-hee, falsified her career credentials in applications for university teaching posts.

Such allegations may carry more resonance with younger voters who struggle for university admissions and jobs in Korea’s hyper-competitive society, and who are not particularly invested in either of Korea’s two major political camps — embodied by the DP and the PPP — which command the loyalty of generations shaped separately by Cold War conservatism and the country’s later struggle against the military dictatorship.

Although Lee has also been hit with revelations that his son frequented illegal gambling venues, this appears to not have damaged his candidacy among younger voters as much as the résumé-padding allegations against Yoon’s wife. 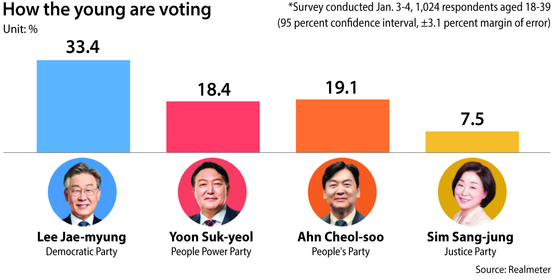 According to a Realmeter survey of 1,024 adults between the age of 18 and 39 commissioned by television channel YTN, Lee holds 33.4 percent support. However, unlike other polls which surveyed voters across all age groups, this YTN survey revealed Ahn and Yoon are neck-and-neck among voters in their 20s and 30s, with Ahn recording 19.1 percent support compared to Yoon’s 18.4 percent.

Of the respondents to the YTN survey, 52.8 percent said allegations against candidates’ family members influenced their choice of who to support in the presidential race. The survey had a 3.1 margin of error and a confidence level of 95 percent.

Other polls conducted around the same time also show that the decline in Yoon’s ratings cannot be wholly attributed to a shift from the PPP candidate to his DP rival, but also to voters now turning toward Ahn.

The survey also shows Ahn holding 6.6 percent support — up 2.9 percent from the November Realmeter poll — suggesting voter support has defected to him from Yoon.

Yoon’s rapidly declining popularity vis-à-vis Ahn was also reflected in last weekend’s Global Research poll of 1,012 adults commissioned by TV channel JTBC, where 41.1 percent of respondents said they backed Ahn as the candidate to consolidate the opposition vote, while 30.6 percent said Yoon was the better candidate.

Perhaps conscientious of his lack of appeal to young voters, the PPP candidate announced Wednesday that he would reorient his presidential campaign to accommodate their concerns.

“From now on, I will carry out my campaign alongside the 2030 generation,” Yoon announced at the PPP’s headquarters in Yeouido, western Seoul. “Voters in their 20s and 30s do not yet belong to an established political camp, and I have realized their views about the world are not only flexible, but also perhaps the most open and universal.”