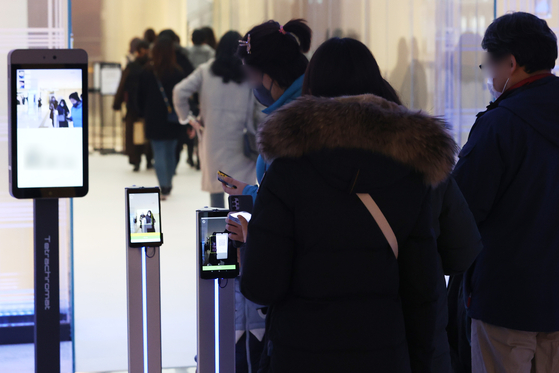 People scan QR codes for entry into a shopping mall in Seoul on Sunday. Starting Monday, vaccine passes will be required at large discount supermarkets and department stores. [YONHAP]


Starting Monday, people will have to present proof of Covid-19 vaccination or a negative PCR test conducted within 48 hours to shop in department stores and large supermarkets.

But the expansion of the vaccine pass system comes as court challenges to it continue — one of which kept the system from being applied to private educational facilities.

Smaller supermarkets and convenience stores, as well as employees working at department stores and large supermarkets, are excluded from the requirement.

While unvaccinated individuals visiting restaurants and cafes alone don’t have to show a vaccine pass, that exemption does not apply to large retail stores and department stores. But minors aged 18 or under are allowed to enter as they are not included in the mandate.

To reduce confusion, there will be a one-week grace period until Jan. 16. After that, fines of up to 3 million won ($2,500) can be applied on businesses, and they can have their business suspended after several violations.

The government has set a six-month validity period for its vaccine passes, making it beyond the reach of people who finished their vaccination course more than 180 days ago. They will have to get a booster shot, which will make their pass valid immediately, even before 14 days have passed.

That measure went into effect Jan. 3 with a one-week grace period.

Following the end of the grace period, people who go into a facility with an expired pass can be fined up to 100,000 won each time they violate the policy.

Business owners are subject to fines of up to 3 million won depending on the number of violations.

The Seoul Administrative Court on Friday held a hearing on a legal challenge filed by 1,023 people — including doctors, religious people and citizens — filed against the Minister of Health and Welfare, the commissioner of the Korea Disease Control and Prevention Agency (KDCA) and the Seoul City mayor.

“Ninety-four percent of Koreans [over 18] have completed their vaccinations. [...] To see the effectiveness of herd immunity, the unvaccinated shouldn’t be isolated but be mingled with the inoculated,” Professor Cho Du-hyong of Yeungnam University College of Medicine, who represents the group, said at the hearing.

“Although only six percent of adults remain unvaccinated, unvaccinated people make up the majority of critically ill patients and fatalities of Covid-19,” refuted Son Young-rae, senior epidemiological strategist at the Central Disaster Management Headquarters, who attended the hearing on behalf of the Health Ministry.

“A vaccine pass is needed to protect unvaccinated people and prevent the collapse of the medical system,” Son added.

The court asked both sides to submit additional documents by 6 p.m. Monday, and is likely to make a ruling as early as next week. If the court accepts the request for a suspension of the vaccine pass system, the passes will be suspended at most facilities until their legality is figured out.

On Jan. 4, a local court partially accepted applications for a suspension of execution filed by parents’ organizations, and temporarily suspended the system at hagwon (cram schools), reading rooms and study cafes, saying that it infringes on students’ freedom and learning rights.

The Ministry of Health and Welfare immediately appealed that decision. 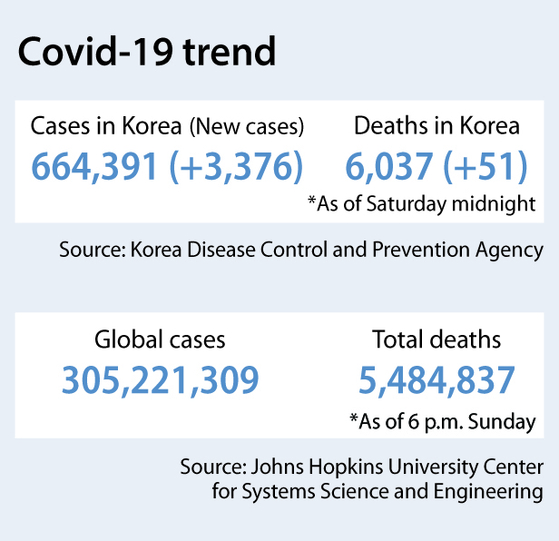 With the country seeing a downward trend in its daily virus tally thanks to the implementation of booster shots and tougher social distancing restrictions, the government plans to bring in antiviral Covid-19 treatment pills developed by Pfizer as early as Thursday.

While the government is discussing who to administer the treatments to first, experts advised unvaccinated people 60 years old or older, then the vaccinated elderly, and then people between the ages of 12 to 59 with underlying diseases.

The oral antiviral treatment is considered a game changer because it doesn’t need to be administered with an injection and can be consumed at home, according to the prescription.