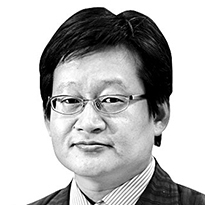 Suh Kyoung-ho
The author is an editor of the JoongAng Ilbo.


In May 2020, I interviewed Rhee Chang-yong, director of the Asia and Pacific Department at the International Monetary Fund (IMF). Based on the interview, I wrote an article about the IMF issuing a warning about Korea’s resort to helicopter money. At the time, concerns were brewing over the country’s surging national debt following its universal relief handouts. A blogger residing overseas posted a comment on the article accusing me of having a political bias as Korea’s debt ratio hovers far below those of developed economies.

Views on fiscal integrity became a litmus test dividing the conservatives and progressives in Korea. Few would disagree with smart spending. Regrettably, however, some still rush to reach a conclusion without rational debates about the problems with hefty spending.

According to the IMF director, Korea’s national debt exceeding 100 percent of its GDP could come faster than the estimate by the National Assembly Budget Office in 2020. The Budget Office projected Korea’s debt-to-GDP ratio at 45 percent in late 2020 would soar to 75 percent in 2030 and over 104 percent in 2040. When more subsidies are needed to sustain the economy against possible disasters like Covid-19, the debt-to-GDP ratio could exceed 100 percent even before 2040.

Except for the United States with dollar reserves, developed economies pay a price for heavy government debt. Japan endured lost decades and Italy teetered on the brink of national default.

In fact, no one can pin down the safe threshold for national debt. What matters more than the sheer number is market confidence in a government ability to manage the fiscal account and economic policy. Lee pointed out that it is the international market — not Koreans — that decides whether Korea’s debt situation is similar to Turkey’s and Mexico’s or the U.S.’s and Japan’s. Although politely spoken, Lee was more or less suggesting that Korea would be judged the same as Turkey and Mexico, which are also OECD members without internationally tradable currencies.

The progressives tend to connect “fiscal integrity” to the conservatives’ wording. Chung-Ang University economics Professor Ryu Deok-hyun talks of “sustainable public finance,” referring to the government’s long-term management of national debt. Given the ratio lower than 30 percent when considering its real debt — and its relatively low level of short-term debts maturing in less than a year —Korea’s debt-to-GDP ratio is not something to worry about, he thinks.

In short, he believes a deficit can be justified for timely spending. I agree that fiscal integrity should be the means and not the ends. But one thing clear is that the Korean government was able to fight Covid-19 fallout due to the fiscal health it maintained so far. Future governments could be less lucky, however.

Given the fast aging and poverty among the old, our welfare spending is bound to increase. Both the conservatives and progressives agree to the inevitability. There are just two means to raise financing for welfare benefits: issuing more national bonds or collecting more taxes. A government cannot let the debt ratio go up. Barring extraordinary cases like the pandemic, welfare spending should be financed through tax increases, not debt.

Lee recommends the government increase tax revenue, including social security contributions, by 0.5 percent annually against the GDP over the next 10 years. He is suggesting a long-term tax increase instead of putting the burden on a certain administration.

Earlier in the month, Rep. Sim Sang-jung, a presidential candidate from the Justice Party, spoke the truth. She said it was cowardly to avoid discussing tax increases while calling for fiscal expansion. She accused politicians of being hypocritical. She got it right.