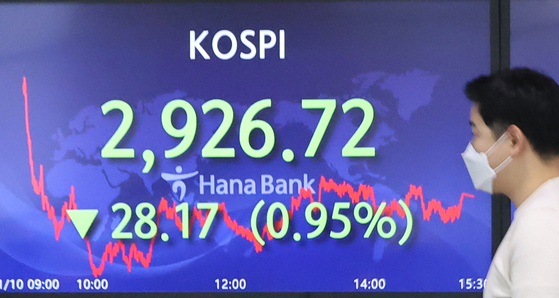 A screen in Hana Bank's trading room in central Seoul shows the Kospi closing at 2,926.72 points on Monday, down 28.17 points, or 0.95 percent, from the previous trading day. [YONHAP]


Stocks retreated Monday, weighed by concerns over the possibility of the U.S. Federal Reserve speeding up tapering and rate hikes. The won rose against the dollar.

Trading volume was moderate at about 470 million shares worth some 10.2 trillion won ($8.5 billion), with losers outnumbering gainers 615 to 259.

The Kospi's decline came amid expectations the Fed has signaled it will complete its tapering and begin rate hikes as early as March in recently unveiled minutes on its December meeting.

Investors are waiting for the Federal Reserve chairman's hearing in the Senate on Tuesday, seeking clues about the U.S. central bank's stance about the rate hikes.

"Investors are worried that Powell might make hawkish comments about inflation in the hearing," Samsung Securities analyst Jeong Myung-ji said.

The local currency closed at 1,199.1 won to the dollar, down 2.4 won from the previous session's close.