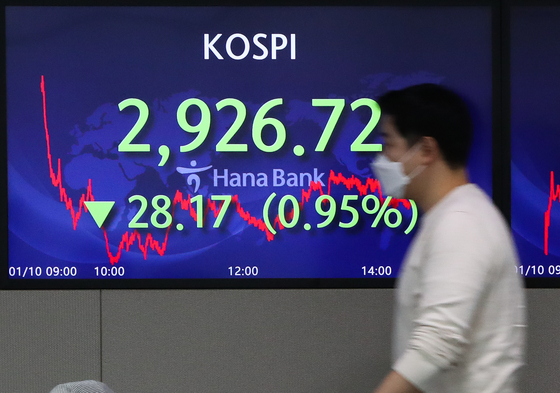 An electronic board displays the closing price of the Kospi at Hana Bank in central Seoul on Monday. [NEWS1]

Foreign investors net purchased 4.3 trillion-won worth of the government bonds and 1.2 trillion-won of monetary stabilization bonds.

As of late December, 45 percent of the bonds owned by foreign investors were set to mature in one to five years, 28.7 percent in five years or more and 26.3 percent in less than a year.

Domestic stocks have struggled this year on a massive selloff by institutional investors, which unloaded 4.76 trillion won of shares in the first five trading days of 2022.

The selling of dividend stocks following the ex-dividend date in December is seen as a reason for the major selloff this month.