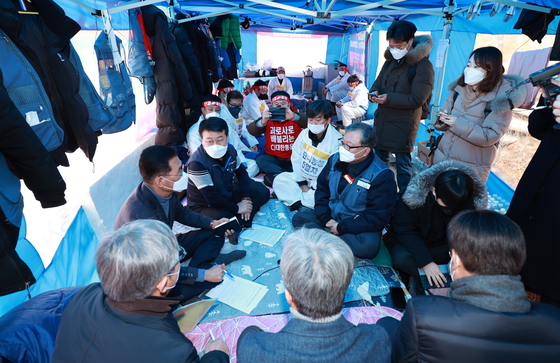 
An additional 10,000 workers are to be hired to handle the Lunar New Year delivery rush, which is arriving as CJ Logistics workers strike.

Lunar New Year falls on Feb. 1 this year, and the demand for deliveries is expected to jump as many exchange gifts during that period.

The hiring is being coordinated by the Ministry of Land, Infrastructure and Transport, and a number of companies were compelled to comply. The ministry declined to identify them.


"The special period was designated to minimize harm to consumers and small businesses considering unionized workers at CJ Logistics, a company that makes up for some 50 percent of the market, have been on strike for more than 10 days," said a spokesperson for the transport ministry. "It was also created to prevent delivery workers from overworking."

The transport ministry advised logistics companies to hold delivery workers less accountable if parcels were delivered late during the period.

Approximately 1,700 unionized workers employed by subcontractors to deliver packages for CJ Logistics, 8.5 percent of the 20,000 total, went on strike starting late December. The delivery workers claim CJ Logistics is not compensating them fairly, although it raised delivery fees charged to customers.

Those on strike are part of a union affiliated with the Korean Confederation of Trade Unions, the more radical of the two major labor groups.

On Monday 12 p.m., Rep. Kim Ju-young, of the Democratic Party (DP) and working on the campaign of DP presidential candidate Lee Jae-myung, visited workers on strike to hear their concerns and ensure better treatment.

Although the number on strike is small, some have been complaining that their deliveries are arriving late. According to the Korea Federation of Micro Enterprises, there are delivery delays in areas including Yeongdeungpo District in central Seoul, Seongnam, Gimpo and Icheon in Gyeonggi and Chuncheon and Inje County in Gangwon.

Many businesses turned to other logistics companies as an alternative, making them extremely busy. Korea Post on Monday temporarily stopped taking new parcels from corporate clients delivered to Seongnam, one of the areas with delivery delays.