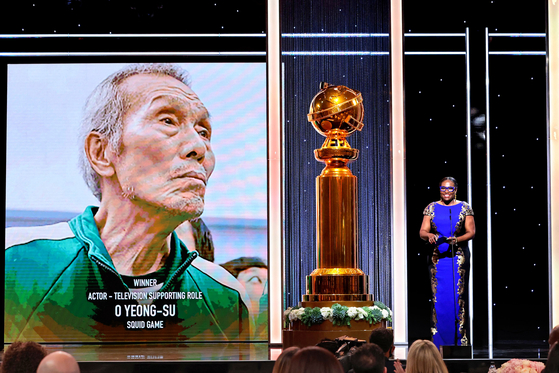 Actor Oh Young-soo wins the Best Performance by an Actor in a Television Supporting at the 79th annual Golden Globe Awards at The Beverly Hilton Hotel in Los Angeles, Sunday. [AFP/YONHAP]


Actor Oh Young-soo won a Golden Globe for his role in Netflix Korea’s “Squid Game” — the first actor from Korea to win an acting award in the history of the awards.

The 79th award ceremony took place at the Beverly Hilton Hotel in Beverley Hills, Los Angeles on Sunday but was not televised due to controversy over diversity in nominations and awards and the running of the organization behind the awards, the Hollywood Foreign Press Association (HFPA).

The 77-year-old actor competed in the category of Best Performance by an Actor in a Television Supporting Role against Billy Crudup in “The Morning Show,” Kieran Culkin in “Succession,” Mark Duplass in “The Morning Show” and Brett Goldstein in “Ted Lasso.” On the Golden Globes’ website, Oh’s English name is spelled as O Yeong-su. 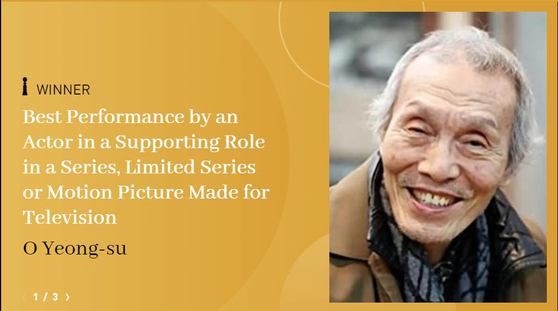 The 77-year-old actor became the first Korean actor from a Korean-made television series to win an award for his performance at the Golden Globes. [HOLLYWOOD FOREIGN PRESS ASSOCIATION]


“After I heard that I won the award, I told myself for the first time that ‘I’m a decent being,’” Oh told Netflix Korea on Monday.

“The world is now living within us. With deep gratitude and appreciation for our culture and love for my family ... I thank the world. I hope you all lead a beautiful life. Thank you.”

However, none of the "Squid Game" cast or its creator Hwang Dong-hyuk attended the ceremony, which was a shadow of its glittery, former self. Only a small gathering of HFPA members and guests attended the event behind closed doors of the hotel ballroom. Instead of the usual broadcast,  award recipients were announced in real-time on the Golden Globes website and its social media feeds.

Actor Tom Cruise returned his three Golden Globes and Scarlett Johansson and Mark Ruffalo publicly criticized the association for its lack of diversity, corruption and resistance to reform.

Korean director Bong Joon-ho’s “Parasite” (2019) became the first Korean film to win the Golden Globe best foreign-language film award in January 2020. As the film was 100 percent in Korean, there was no criticism of its category. Bong made a point in speeches that year that languages should not be a barrier in the valuation of films.

The backlash against the Golden Globes came in December 2020 after director Lee Isaac Chung’s film “Minari” was placed in the category of foreign language film although the film starred Americans, was directed by an American and produced, financed and distributed by American companies. That placement automatically made the film disqualified to compete in any other category including best picture.

According to HFPA rules, a film's dialogue must be at least 50 percent in English to compete for best drama or best musical/comedy.

As a result, Hollywood celebrities began to announce they would boycott this year's event. Last May, NBC announced it would not air the 2022 ceremony. According to the New York Times, HFPA is currently working to reform itself with “extreme urgency.” 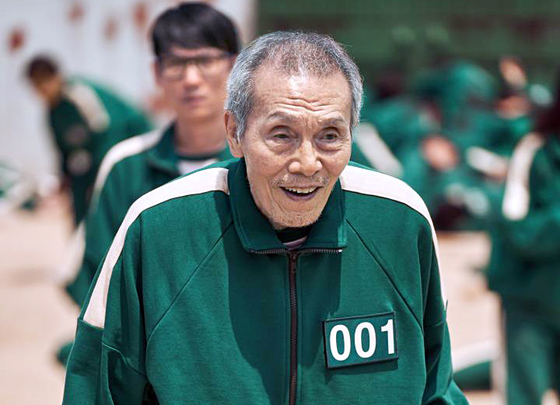 A Scene from "Squid Game" featuring Oh Young-soo as the character Oh Il-nam, or the player No. 1 [NETFLIX]


But even this year, Oh achieved what “Parasite” and “Minari” failed to achieve: he is the first Korean actor from a Korean-language production to win an acting award in the Golden Globes’ 79-year history. American actors of Korean descent have won before, including Sandra Oh for “Grey’s Anatomy” and “Killing Eve” and Awkwafina for “The Farewell.”

"Squid Game" was also nominated for two other awards — Best Television Series — Drama and Best Performance by an Actor in a Television series — Drama for Lee Jung-jae. It failed to win either.

For Best Performance by an Actor in a Television Series — Drama, Lee competed against Brian Cox and Jeremy Strong from “Succession,” Billy Porter in “Pose” and Omar Sy in “Lupin.” Strong took the Globe.

Oh, whose real name is Oh Se-kang, majored in theatre at Dongguk University and debuted as an actor in 1963. The actor debuted on the silver screen in 1965's “The Seashore Village” and was also in director Kim Ki-duk’s “Spring, Summer, Fall, Winter… and Spring” (2003). But he was largely known for his theater work until he was cast as player No. 1, also known as Oh Il-nam in “Squid Game.”

The actor is currently performing on stage in “Freud’s Last Session” at TOM Theater’s Hall 1 in Daehangno, central Seoul, in the role of Austrian psychotherapist Sigmund Freud.

“Squid Game” is the most-watched Netflix show of all time with some 140 million viewers around the globe since its release in September. It broke the record for staying No. 1 on Netflix's Top 10 TV shows in the world: 46 consecutive days from Sept. 23 to Nov. 7. It was the first Netflix original series to top daily charts in all 83 countries in which the platform currently streams.

Hwang revealed in an online interview with local broadcaster KBS last month that he is currently in discussion with Netflix to create two more seasons of the series.

In November, the series won an award for Breakthrough Series — Long Format at the 2021 Gotham Independent Film Awards, its first major win at a U.S. award show. It also won The Bingeworthy Show of 2021 award at the 2021 People’s Choice Awards.