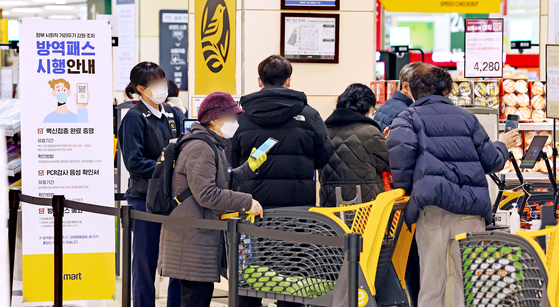 Shoppers flash QR code to prove their vaccination status upon entry to an Emart in Seoul on Monday, when large supermarkets and department stores began requiring vaccine passes for entry. [YONHAP]

Korea became one of the first countries in the world to require a vaccine pass at supermarkets, although only giant ones, to curb the spread of the coronavirus infections.

The expansion of its vaccine pass policy, which health authorities said is a "more scientific and rational solution” than tougher social distancing restrictions, left some people disgruntled.

Choi Na-rae, pregnant with her second child and unvaccinated as a result, was turned away from a big supermarket in Mapo District, western Seoul, on Monday. She said she needed a carton of milk for her 5-year-old boy.

“When I’m pregnant or breastfeeding, I stay away from even medicine for a common cold because I’m afraid of the drug’s effect on my baby,” she said. “My current condition leaves me without much option other than to be unvaccinated. But the current vaccine pass policy does not allow exceptions.”

Starting Monday, vaccine passes are required at supermarkets and department stores larger than 3,000 square meters (32,300 square feet). There is a trial period for the policy until Jan. 17, after which violators will be fined, according to the Health Ministry.

People who have had serious reactions to shots and could not complete the vaccine course, or did not get a third booster shot, have to present a note from a local health center to prove they have a valid reason for waiving their shots. The second shot of a vaccine course is deemed out of date after six months in Korea.

There is no waiver for pregnancies.

In other parts of the world where vaccine passes are also being used such as Israel, Italy, New Zealand and some states in the United States, essential stores such as grocery stores can't bar the unvaccinated. France has been embroiled in a public debate for weeks on whether a bill to mandate vaccination should be passed.

“We decided to include department stores and large supermarkets for the sake of being fair [since many other high-risk facilities were added to the list],” said Health Minister Kwon Deok-chul in announcing the decision to require vaccine passes for entry to these facilities in a press briefing on Dec. 31.

The country has been battling the fourth and largest wave of the pandemic since mid-July, though daily cases, which peaked around 7,800 last month, have been dipping in the past two weeks. Korea added a total of 3,007 new cases on Sunday, according to Korea Disease Control and Prevention Agency (KDCA).

“We think the vaccine pass system is the more scientific and rational solution that will help Korea get through the current Covid crisis,” said Sohn Young-rae, a senior Health Ministry official, during a press briefing on Jan. 5. “Strengthening social distancing guidelines can do the job but it comes with a high price, because they restrict everyone's economic activities.”

“The latest expansion of the vaccine pass system may be part of a strategy to increase pressure on the unvaccinated to get vaccinated,” Kim Woo-joo, a doctor specializing in infectious diseases at the Korea University Guro Hospital in Seoul, told the Korea JoongAng Daily on Thursday. “It’s a dangerous move, however, because they’ve expanded the vaccine passes to essential stores, the supermarkets.”

There is a pending case at the Seoul Administrative Court on whether vaccine passes infringe on basic rights of people. A case was submitted by 1,023 doctors and other professionals on Dec. 31 asking for a review of the policy and a temporary halt to the vaccine pass system at restaurants, cafes and other facilities.

The court also accepted a case earlier last month requesting suspension of the policy to require vaccine passes from those aged 12 to 18 at private educational facilities, such as hagwon (cram schools), reading rooms and study cafes from March. It ruled on Jan. 4 that a temporary halt to the policy should be effective immediately and be in place until a final ruling.