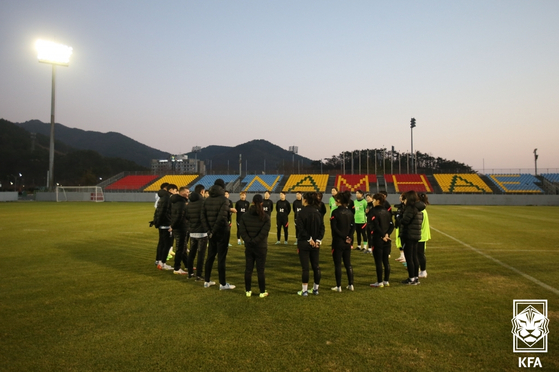 The national team started training at Namhae Sports Park in Namhae, South Gyeongsang on Jan. 2. Eo Hee-jin and Jeon Eun-ha had joined the national team training but will not be heading to India due to injuries. Cho So-hyun and Lee Young-ju of Spanish club Madrid CFF will join training on Tuesday.

The team now has 11 days before their Asian Cup campaign kicks off in India with a game against Vietnam on Jan. 21. Korea are competing in Group A alongside Vietnam, defending champions Japan and Myanmar.

Korea have proven especially unsuccessful at the Asian Cup. In the 19 tournaments to date, Korea have never once reached the final, making it to the semifinals in 1995, 2001, 2003 and 2014. The team's best finish was third place in 2003.

This year's tournament will by no means be easy. Being drawn alongside Japan in the group stage presents a considerably challenge — Korea have only beat Japan four times in 31 games. Beating Japan isn't strictly necessary, as the top two teams from each group advance as well as the two best third-place teams, but, as with all knockout tournaments, a better finish in the group stage leads to an easier knockout round.